Last week my sister went along to her youngest boy’s first school nativity. They were shocked to see him sitting in his uniform on a bench next to the teaching assistant- the only reception child not in costume and the only reception child not in the play. Wondering why, my sister approached the teachers involved who told her that he wasn’t participating because, due to his autism, he’d spoil it for the other children.

Words can’t describe my sister’s hurt, my family’s rage, all of our friend’s disbelief.

If it wasn’t so upsetting it would be laughable. The original nativity; in a manky stable with foreign wisemen, smelly shepherds, shitting sheep, overbearing angels, a nursing mother with leaking breasts and a wailing baby, all welcome and all important. And a tiny school in rural England exclude a beautiful four year old from their tribute because he is different.

I guess it is just fear, at the bottom of it all, isn’t it? People are scared of difference, of being different, of new things, of change. We find it hard to make inclusivity our default- it is why we need Human Rights Conventions and Equality Legislation.

And a human need to control. To erase any possibilities of unpredictability, to manipulate circumstances so things are exactly as we want them. So while the first nativity was majestic chaos there was a 2013 version in a corner of England where the children were so controlled a little girl wet her pants instead of disrupting the scene.

I think this end of year holiday is a chance to let go of our fears and our need to control. Whether we are celebrating the confusing birth of a deity to a poor teenage mother or gratefully heralding the lightening of the days in the Winter Solstice, it’s an invitation to be our better selves, our golden selves.

To be kind and courageous.

To believe in others, to trust them.

To be at peace.

We had our leaving party in London on Sunday (we are actually doing this. This moving to New Zealand thing.) And a couple of days beforehand my Aunty suggested we redo my nephew’s first nativity, reclaim it. So midway through the bash all the kiddos (and some childlike adults) donned their outfits and my mum narrated a nativity that almost certainly rivalled the original in terms of disorder.

We had two Josephs, about a squillon angels, a star that very much looked like a Winnie The Pooh helium balloon and some wise girls and boys that followed it uproariously and at great speed around the hall. Of course, my nephew sat impeccably through the whole thing with the obligatory tea towel headgear, completely accepted, loved, included, just as he is. 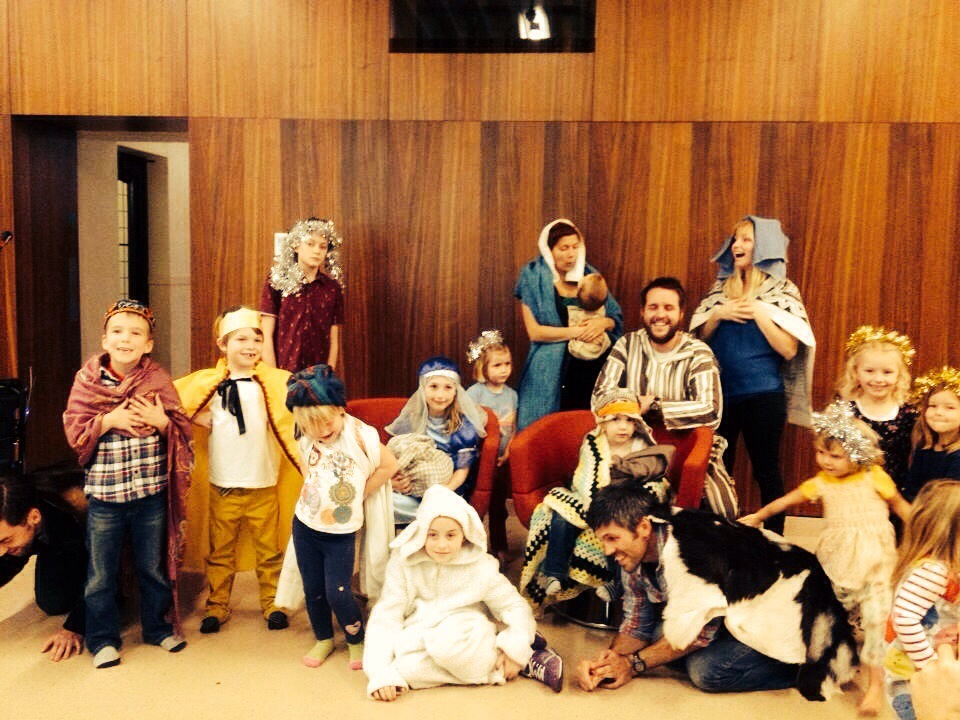 I was struck just last week by this bit in Escape From Childhood by John Holt;

Paul Goodman, in his many talks with young people, used to say that one good way to work for a truly different and better world was to act in their daily lives, as far they could, as if that world existed. What would you do, he would ask them, if the world had become more or less the kind of place you want it to be; how would you live, how would you treat other people? Live that way now, treat them that way now. If something prevents you, try to find a way to deal with that. We can begin to treat children, even the youngest and smallest, wherever we may find them, as we would want everyone to treat them in the society we are trying to make.

Let’s do it, eh? Starting this Christmas. With children and adults. In our playing, our laughing, our talking, our disagreements, our arrangements, our mealtimes, our family politics, our school PTA, during our grocery shop; let’s act as if the world is run on love, as if it is already the kind, inclusive, brave, embracing society we want.

Peace to you x x