We were soaked to the bone, mother, baby and toddler standing on the corner with an outstretched arm and hopeful thumb. Fortunately the first car responded and picked up this little hitchhiking trio of drowned rats. We had been caught out by both a raging storm and a mythical local bus in the middle of one of Croatia’s National Parks, Plitvice. Our campsite, the beautiful Korana, was six kilometres away along a crazily unwalkable road, but thanks to the two Israeli tourists who picked us up, we we were soon zipped back in to our tent drinking hot chocolate. At one point on the ride home they said “We saw your little family earlier, in the rain, by the waterfalls and thought it was so cruel/cool…” We still don’t know which it was and I guess it could really be either depending on your view of weather/ children/ raincoats. We all enjoyed ourselves a lot more than if we’d opted to sit in our tent exhausting Ramona’s one book of fairytales! (Gah, just admitted we only bought one book with us.) (Also… we all do tend to have a but of fun when things go awry… I think it’s a part of my personality – the more dire a situation is the more cheerful I become; you know we are in a right pickle if you hear me belting out “You’re never fully dressed without a …. SMIIIIILE” in a broad American accent and busting out a bit of tap dancing.)

The fact that we first encountered Plitvice in a torrential downpour, while squished between tour bus group after tour bus group of tourists, and still found it to be singly the most beautiful place on earth, attests to its flipping awesomeness. (I originally had “breathtaking wonder” but then remembered I wasn’t David Attenborough.)

It is a series of lakes connected by waterfalls, lakes that are so clear that when you are standing on the shore the ducks appear to be floating in mid air, and when you are standing on a cliff looking from above there is a perfect mirror image of the waterfalls reflected on its surface. A wooden path weaves over and alongside the waterfalls, making you feel almost a part of it. As you trace the lake’s shoreline from one waterfall to another the sound fades until you are left with simply the chorus of crickets… Then you approach the next connecting fall and the sound builds gradually until you are right amongst the cascades, it’s ferocious noise causing you to shout.

“SHALL WE TAKE A PICTURE?” “NAH, LET’S KEEP GOING SO WE CAN GAIN TIME ON THIS TOUR GROUP!” “BUT WE’LL WISH WE HAD MORE PHOTOS!” “WE’LL GOOGLE IMAGE IT!”

We were so pleased we got the two day pass (about £15 per person) as the next day was bright and sunny and we explored the upper lakes at leisure. The upper lakes seem to be free from the cumbersome tour groups but are just as spectacular.

Someone we met later on in our trip told us they skipped Plitvice because of all the tourism and “Seen one waterfall, seen ’em all right?!” We nodded, not wanting to break it to him. But the answer in this case is really Heck No. The falls of Plitvice are gobsmacking in their seeming endlessness; everywhere you look there is cascading water, their scope; enormous, tiny, wide like someone busted up a damn, gentle trickles, and the water; like every Evian advert ever made melted together, like the water all water on earth would be like if we actually lived in heaven. 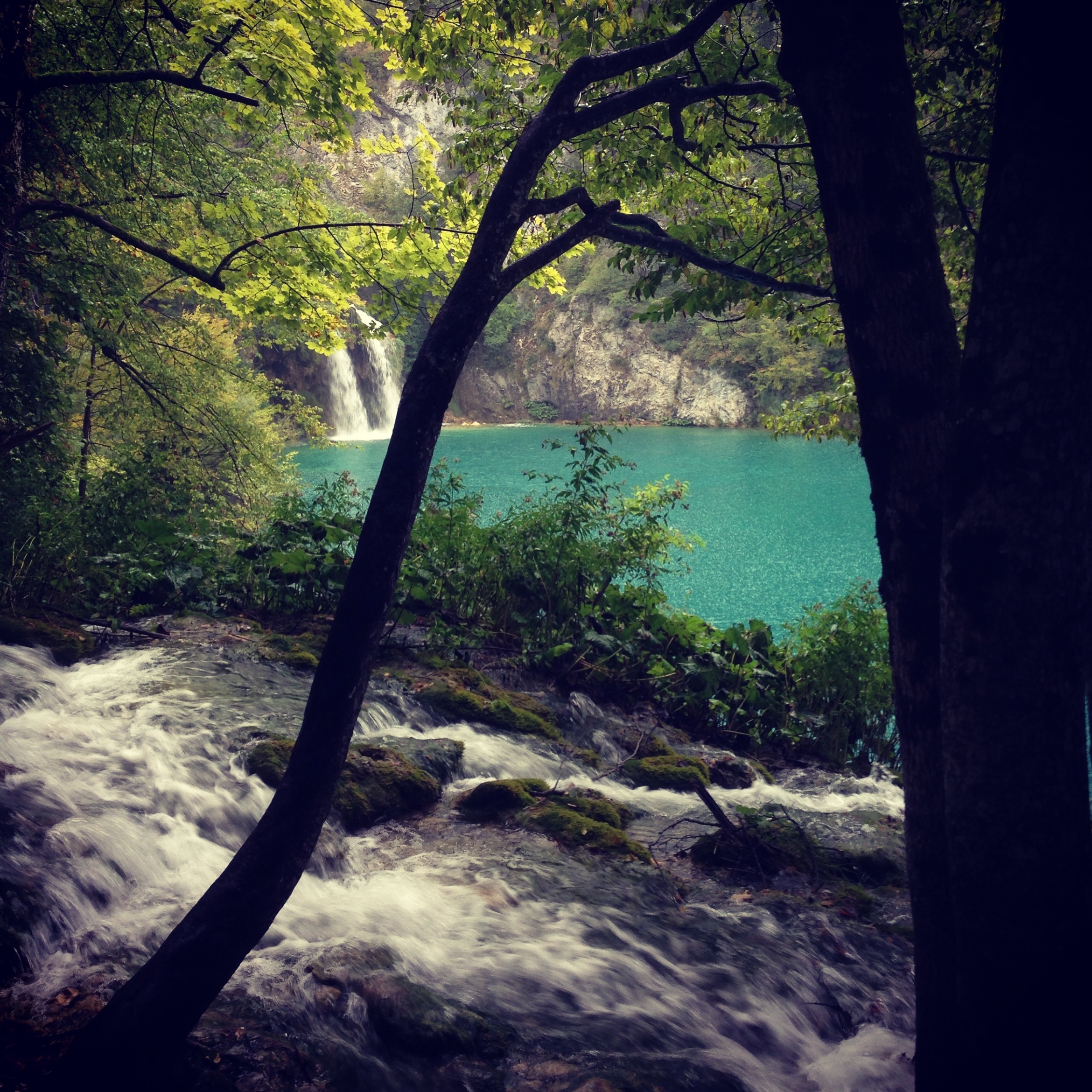 It was water that lured… Tempting throatily like the serpent… “Come in, splash here, dive down in my divine depths… OH COME ON YOU BORING OLD TOAD AT LEAST DIP A TOE”

But alas, Plitvice’s only bad point (apart from an unreliable bus service and crowds) – you can’t swim! Honest! It is a travesty that there isn’t even a tiny little designated area. Croatia, please sort this out. We won’t even wee in it, PROMISE.

(Also, another major downer: you probably won’t actually see a bear here. Even if you read about Plitvice and bears on the Internet and that was the main reason you came, really, that still doesn’t make it likely that you’ll see a bear because, hello?! They are so right in the middle of All The Nature not hanging out with all the tourists on the paths, okay, hahahaha SILLY! *weeps for self and lack of bear viewing*)

Back to the swimming thing… You can’t swim at Plitvice but swimming in other Croatian National Parks is ALL ON. Which is why we pootled a couple of hours south down to Krka (pronounced Krka) for more waterfalls. 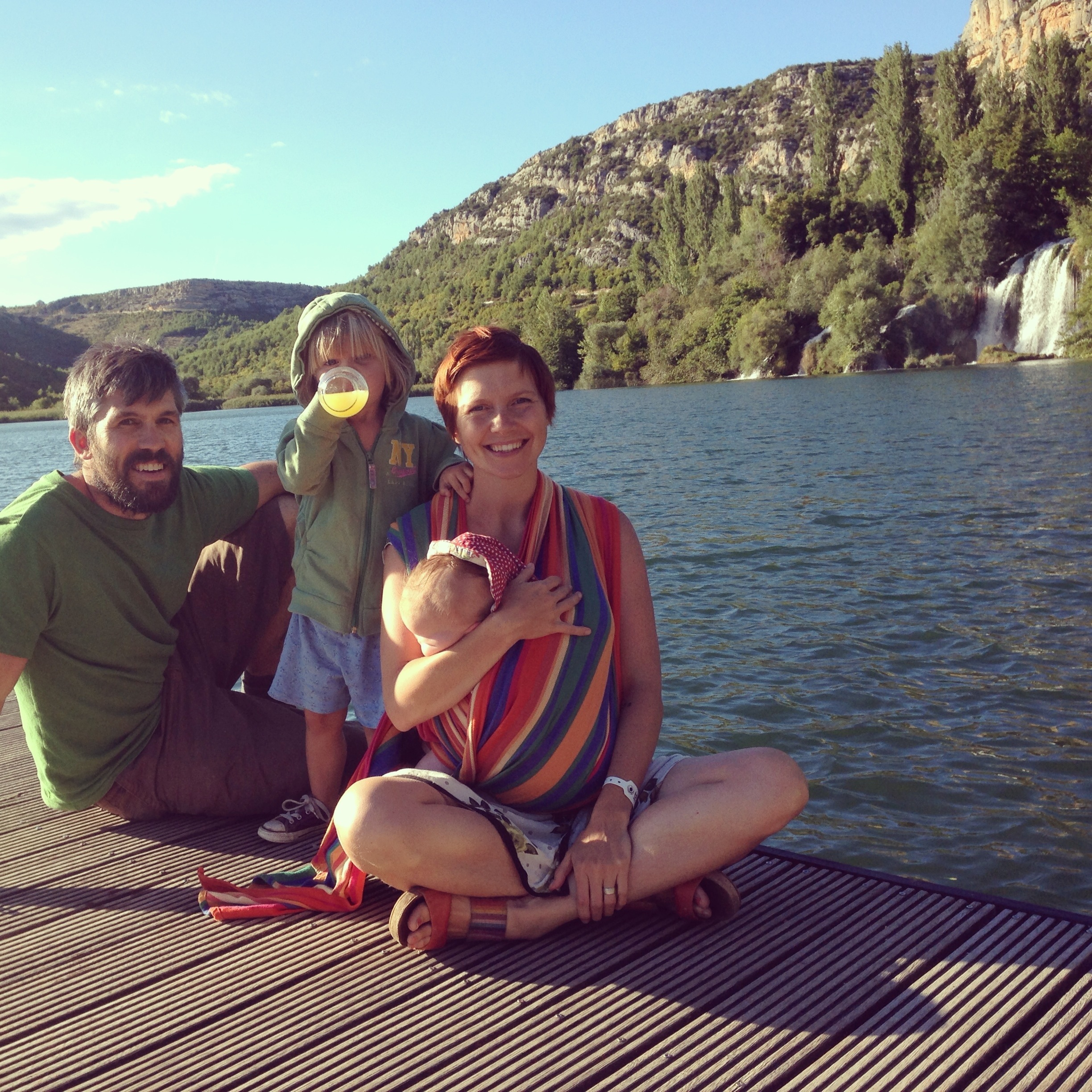 Krka National Park was a fair bit less crowded and seemed to be loads more family friendly. Something about being able to swim there made it all feel as if everyone was there to participate in outdoorsy activity rather than just take photos of the outdoors. Like Plitvice, it was fall after fall. Any single one of them would have done the country proud but yet again there they were gushing all over the place. A bit showy offy there, Croatia, with all this breathtaking wonder. 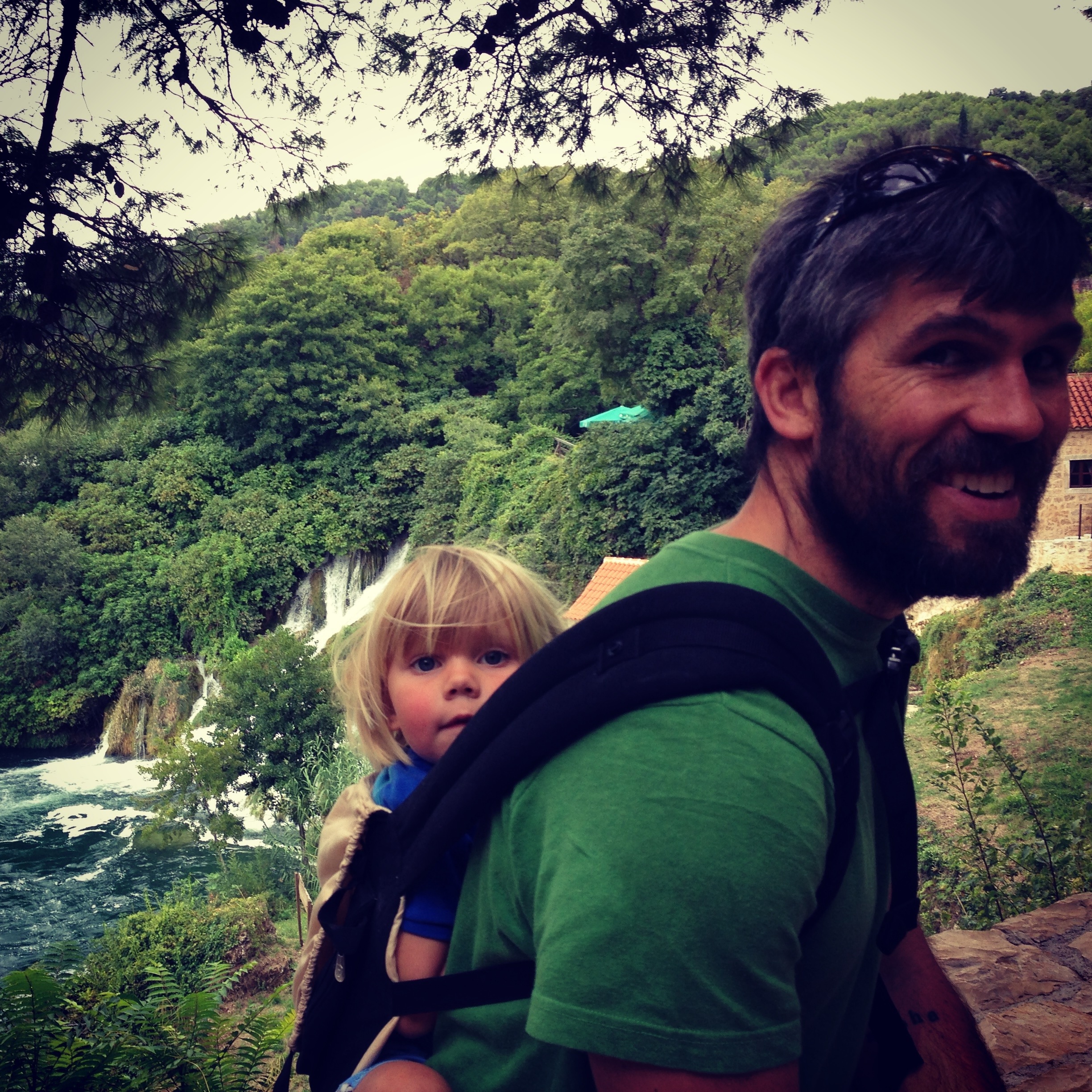 The swim was majestic, just as you’d imagine swimming under an enormous waterfall to be. We all went in and all thought it was pretty cool. Ramona calls waterfalls “mountains” – rationally i figure it is because they are like “fountains” but massive and with added grandeur. She still talks about swimming under the mountain, a week later.

The path was lined with fig trees too, so we got to partake in my favourite hobby, and foraged our way from waterfall to waterfall. They were tiny and juicy and we scoffed them like we scoff blackberries on our walks in England.

We spent four days in the Krka region, two of them in the park (a two day pass was £12) as we just really liked it. At the southern end of the National Park, in actual Krka town you can swim in the river and it is the point at which it meets the sea. It is a crazy feeling; the chill of the river water on top, the warm, salty buoyant water below. We found a walnut tree and got about a billion and just sat munching walnuts and figs feeling that beautiful foragey contentedness.

Juno, at five months old, is really swiping at all our food now. You should see her trying to get our figs, she bustles about, purple with determination, pivoting 180 degrees on her rotund belly. She managed to hustle Ramona’s cheese sandwich yesterday, I’m unsure if that’s better or worse than the twigs and dirt she is usually scoffing. And then there is Ramona who is thriving on our “Pick Every Ripe Fruit You Pass” and “Ice Cream Every Other Day” policies.

We have been on an Island for the last few days, can’t wait to tell you about it… 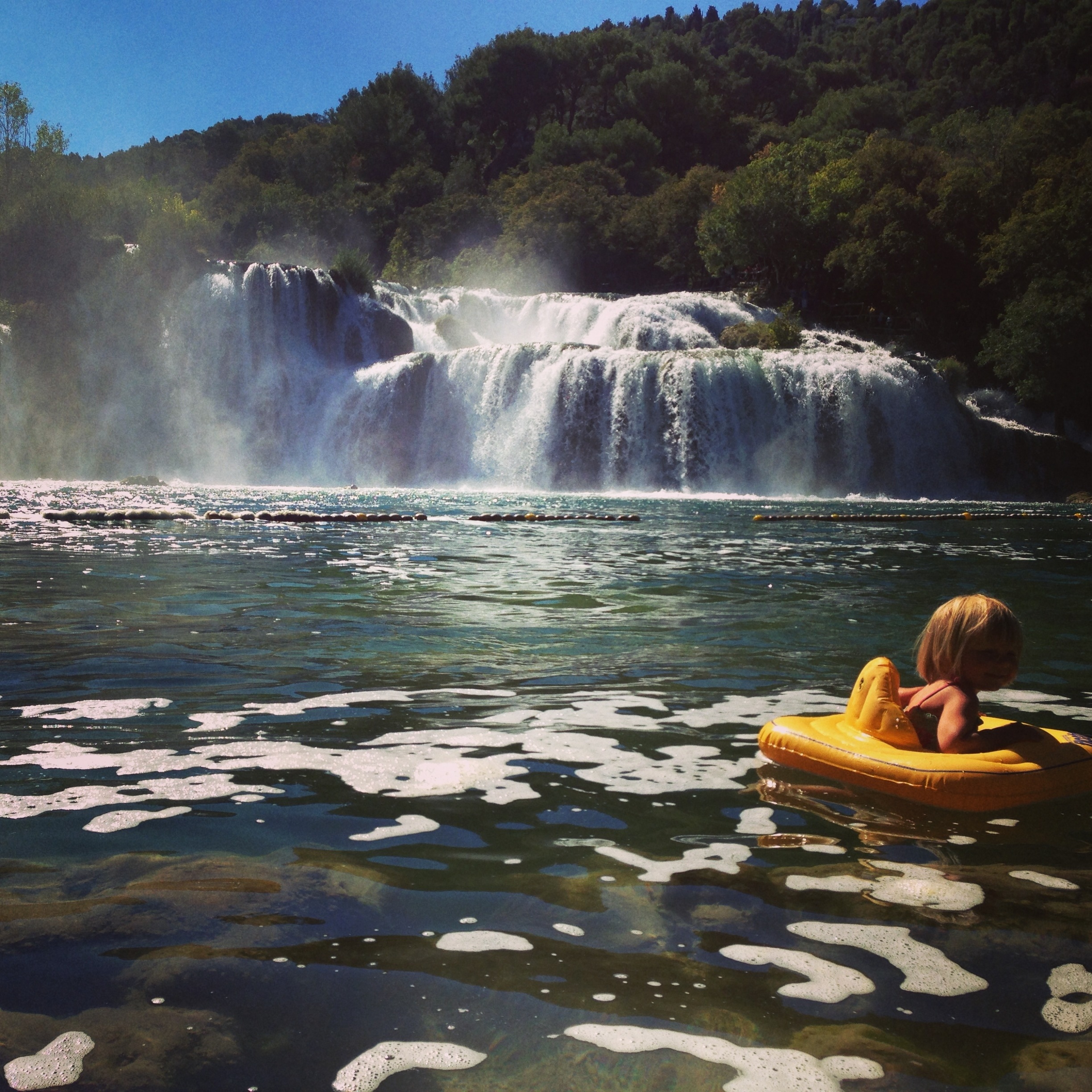 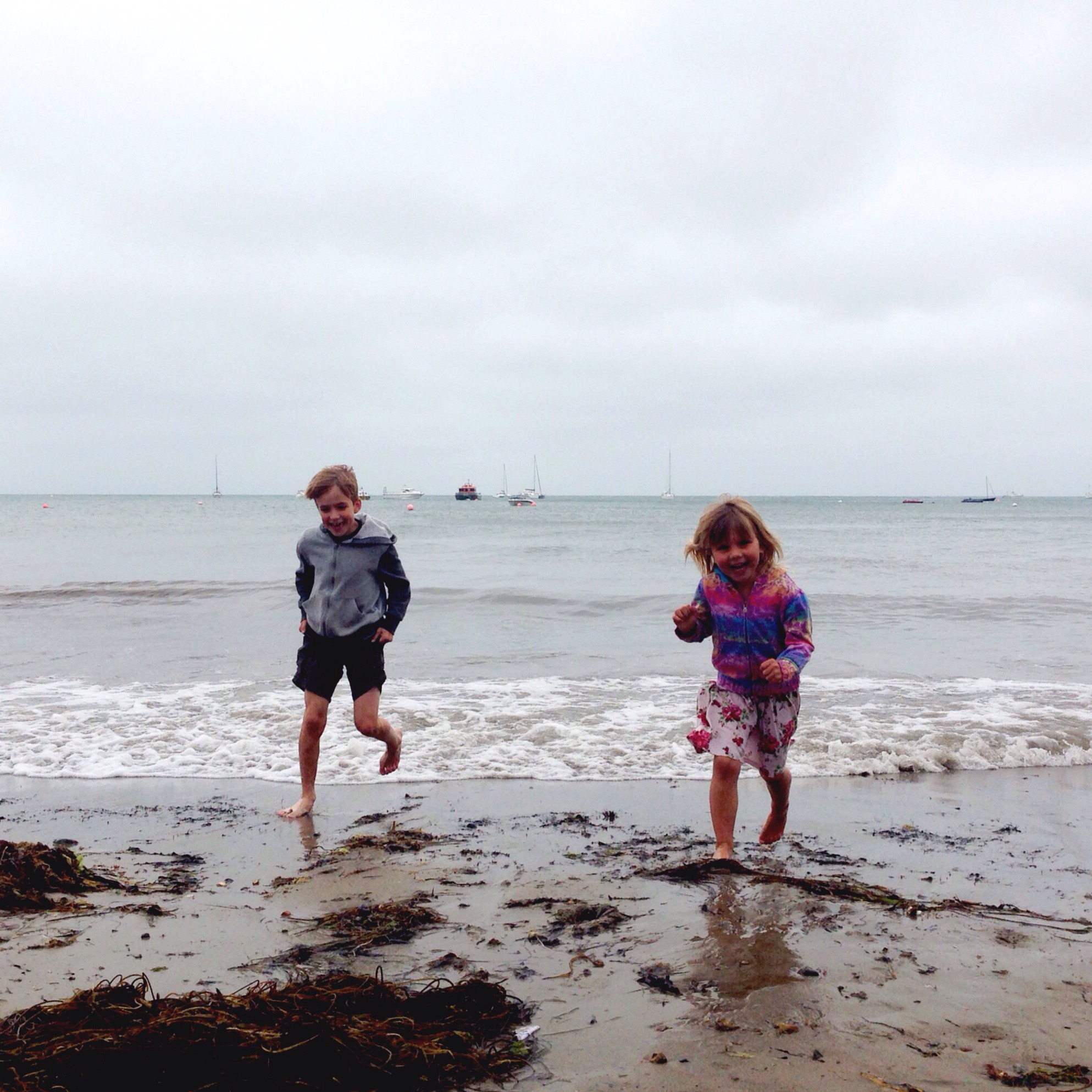 How to be an Expat Parent