Today has been our last full day in England for a while. Tomorrow we fly to New Zealand to begin something wholly new. We don’t know what, but we have a few (billion) ideas.

The last week has been a bit emosh, to say the least. My heart jumps into my throat at the littlest thing- my nephew Hudson reading Ramona her bed time story, looking at photos that have captured fun moments from the last few years, saying weepy, snotty Goodbyes to friends who’ve been my besties since I was seven.

It’s been the most overdrawn goodbye in some ways. We began properly telling everyone that we were moving to New Zealand at the start of the summer, mostly through, er, this blog. *note to self- best to tell employers about such a big move before blogging about it*

Then we said Cheerio and galavanted about Europe, than came back with a broken van, then said Laters again and trundled to Spain, then had a leaving party last week, and now, after a million farewells and six months of preparing to go, it’s here for real, quick as a flash, the time to leave.

I fall in love with New Zealand when I’m there. I really do. I moved there when I was 18 and lived there until I was 24. I met Tim there and when Tim and I were having those hypothetical conversations with each other about the possibility of marriage (you know, “If two people had only just met but really loved each other should one, like, ask the other one to get married? It’s just for a friend…”) he asked me which place I considered home. I didn’t think twice. I’d lived in New Zealand for five gleeful years already, three with my folks about and two more without them, without any family at all; “New Zealand! I never want to leave!”

We left about 18 months later, in response to an urge I had to be close to my sister while she had her first baby. And we’ve been here almost seven years… 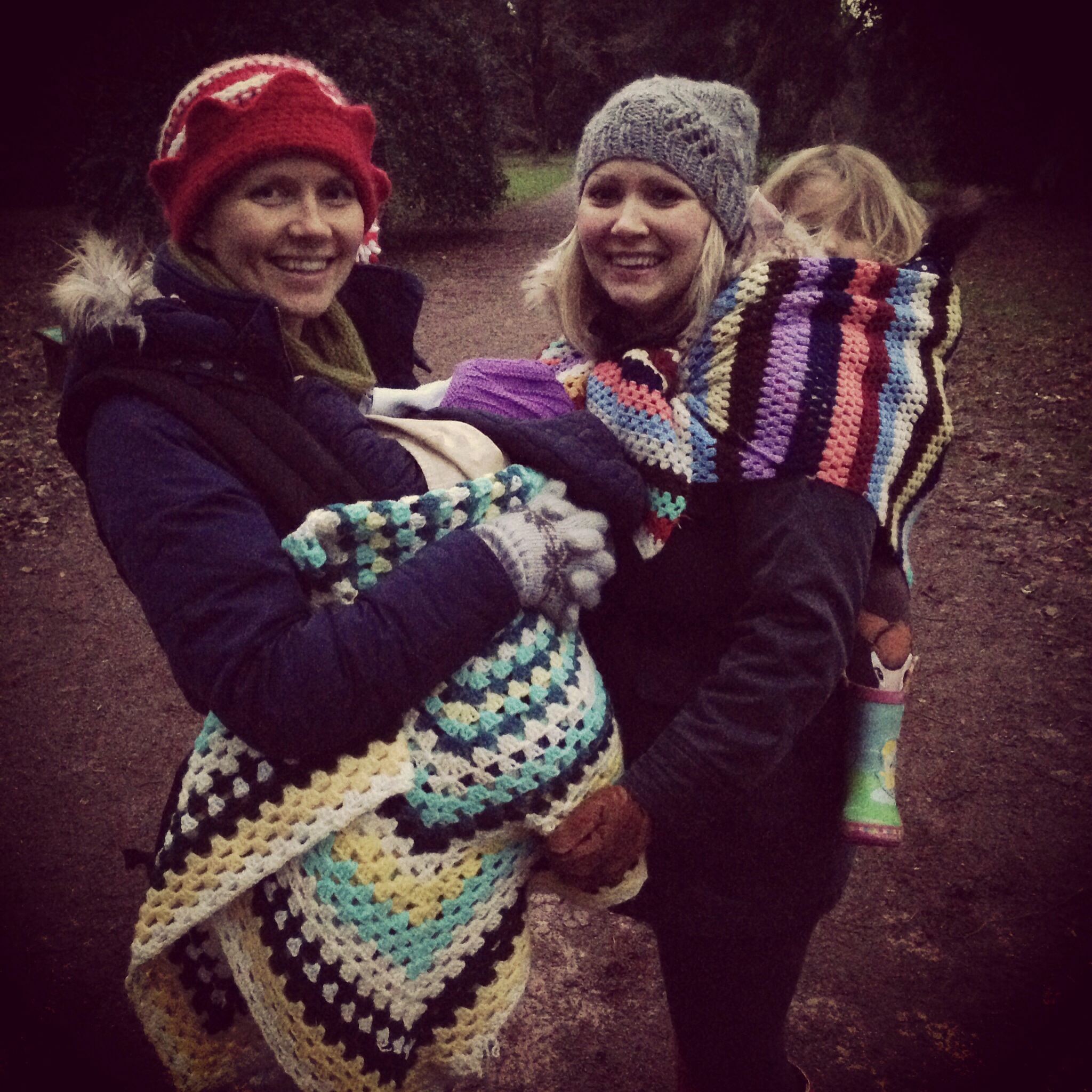 My sister and I this week- matching blankets, coats and babies! (She is on her third now.)

For about five generations my family has been fairly nomadic- staying in places for just a couple of years at a time. Every generation, until us, have been ministers of religion, living all over the UK and the world for different vocational roles.

My grandparents, whenever anyone asked them what place they loved the most, which area they called home, would always reply, wherever they were, “Right here!”

I guess it’s in my blood a little bit, eh? This love-the-place-you-are thing.

My folks, this week.

Because right now I really feel I am tearing myself away from here. I feel like the London that I spent much of my childhood in has been in my bones all along. That returning to the neighbourhood I grew up in, and raising my girls for a bit here, has kind of unlocked a deep sense of home, a primal “This is my land! These are my people!” kind of thing. (Also, “These are my fried chicken bones! These are my fallen out hair weaves!” – not a patch of ground exists in South London free of these. But they weren’t actually mine, you see…)

We have just had the most wonderful 7 years here. We’ve made so many good, new friends and have rekindled old ones. We’ve had such a lot of adventures, riding our bikes, joining in protests, communal living, wandering streets, going to festivals, picnicking, swimming in rivers.

We arrive in New Zealand at 11:45pm on the 31st December- that is quarter to 2014! It’ll be weird celebrating the New Year with strangers around the baggage carousel (but I’ve had weirder, especially the one involving lots of elderly Scots and bagpipes.)

So, a new year and a new home, and lots of new adventures awaiting us. I just need to find out what a Zealand is, then I’ll get a new one of those too.

Have a lovely celebration yourself, and I wish you a great sense of hope for the year ahead.

*looks around the room at my family, has a bit more of a cry*

How to travel Europe with your family

Oh, yeah, also: NEW BLOG! You are going to want to marry it…