*ping* Another notification from someone about the problem with ipads. This time ipads are responsible for humankind never stepping outdoors again. Yep, our children will be the last generation that played outside.

I guess people think I like this stuff because I wrote a book on families rewilding and often post about how good it is for kids to get outdoors and fun things to do outdoors and all that nature shizzle.

But you know what? I think the ipad is a TOTAL bogeyperson.

(HA bogeyperson! What do we want? Non gendered language for bogeypeople! When do we want it? Now!)

We set up technology as the enemy of nature and it isn’t. Taking the ipad out of our child’s hands is a quick and easy answer to a multi-faceted problem, and it is a disrespectful, short-term and narrow minded solution.

I can think of many, many things that impact our child’s well being and relationship with the earth more than playing on the ipad. 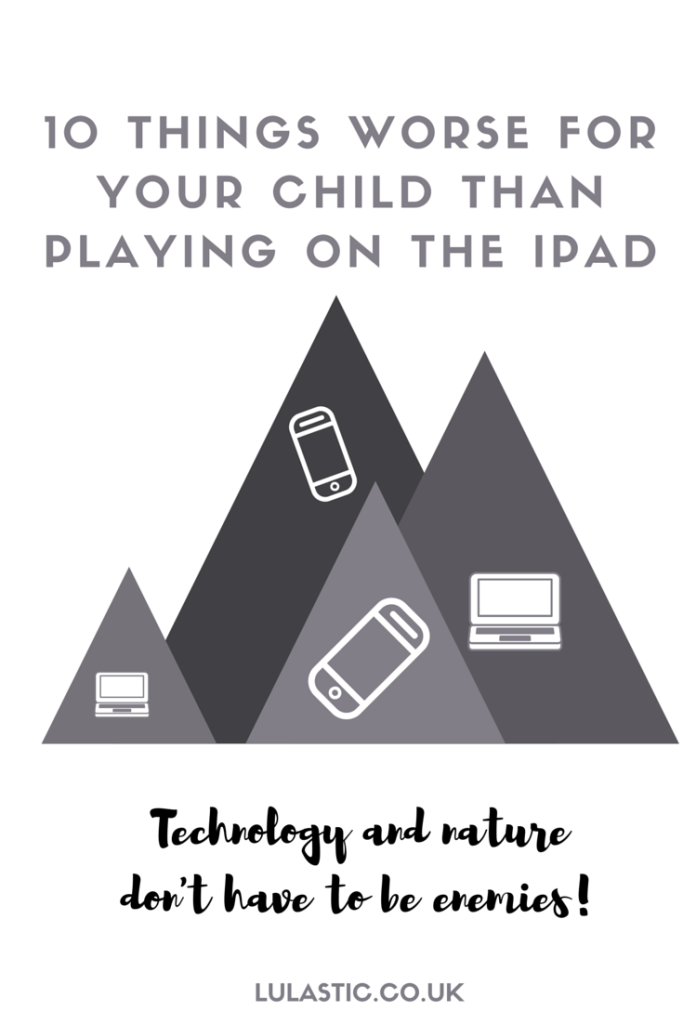 1- Being told the things they love aren’t important
This one is so close to my heart, because I am learning as I parent. I had a list of things I would never “let my child do” but as her different likes and loves unfold she is showing me that it is not up to me to tell her what she should and shouldn’t love. I have some knowledge and wisdom from my longer life, and I will share it non coercively. Celebrating with them over the things they love is a far better way to developing a trusting relationship with our children. Imagine if your other half didn’t like you doing your favourite hobby so huffed and puffed around yo every time you did it? That would feel so awful, that constant undermining, and it would hugely damage your relationship.

2- A parent that doesn’t partner with them
Instead of telling them the things they love suck, the invitation is to partner with our children. To help take their love of something on the ipad and take it to the next level. It is to trust that technology can open huge doors for learning. They love Happy Feet? Perhaps they are working through themes of loss and grief and reuniting (I *may* be talking from experience…) how about entering into imaginative play with them and the penguin stuffed toys, or getting all the penguin books out, strewing about some penguin costumes and seeing if they want to take Happy Feet to a deeper level? The potential is for a huge connection, begun by an ipad…

The invitation is also to PLAY with them. Not use the ipad as a babysitter but take it in turns to play, as another child would, to find out about their favourite game. Last week we had a huge car journey and I sat in the back and played Ramona’s favourite game, The Dolphin Show, for 4 hours straight. We were trying to get a million points in order to get the dolphin that farts rainbows. After about 3.5 hours, she turned to me and told me about something cruel someone really important to her had said to her, and described how her heart had been hurting ever since. I had observed that for a few days she had been really quite emotional, but I hadn’t been able to get to the bottom of it. Spending time jumping through hoops (no really, we were jumping our dolphins through hoops) really joyfully (it is THE BEST GAME) deepened our connection to a point that she felt able to fully open up.

3- Learning Latin
Some schools still teach that. Shiver my timbers. If we really want to target something that stops children playing outside it should be the thing that ties them to a desk for several hours everyday (635 hours a year for under elevens!) learning stuff that is often age inappropriate, doesn’t recognise the important of play and the biological imperative for movement and may well never be used again in their lives. (*cough* algebra *cough*)

While we have chosen to unschool in order to foster a more curiosity led education, schools around the world have successfully changed; schools in Finland have reflected research on this and introduced far healthier learning foundations in State schools, there are Forest Schools in Germany. You know what would make the BEST target for a child’s time not spent playing outdoors? It is the classroom.

4- Parents that don’t make an effort with nature
Here is my bugbear…. all this reminiscing about our natural childhoods (er, mine was spent watching Going Live) and freaking out about Nature Deficit Disorder, without realising that the responsibility for our child’s relationship with nature lies with us! You know what? If WE love nature, and prioritise it, if we run barefoot in the forest and climb the trees and lie and look at the stars, this love will so likely become infectious. Children don’t learn by us telling them (the ipad is the enemy of nature, darling!) but only by modelling. 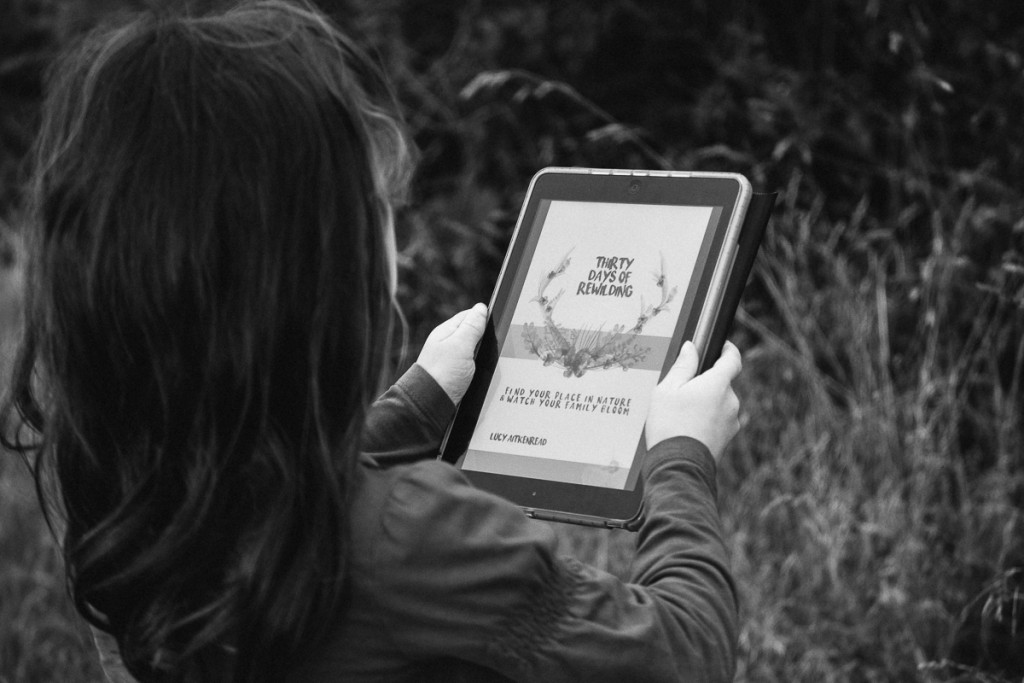 Technology and Nature are friends! Thanks Annie from Fable and Folk for the picture.

5- Double Standards
Oh, by golly, if I read about Steve Jobs not letting his kids play with an ipad one more time I will send Apple a scary barbie in the post, I will, I tell you!!! The double standards! OH MY!! This is the kind of unfairness that I think could really damage a child’s likelihood to grow up caring about fairness.

6- Having nowhere to play outside
How about targeting society’s obsession for turning every spare bit of land into malls, instead of handing them over to the people for nature places? (Okay that is a little bit Daily Mailish… let me pull back from the extremisms.) Society is narrowing the places that childhood has been traditionally spent, either by building on them, or risk assessing them (try swimming in the many beautiful swimming holes in the UK without getting the “Do Not Swim” sign pointed out to you) or disallowing ball games from them. How about giving children access to the streets for free play?

7- Having little say over the activities in their life
A child is a person. They deserve to get a say over their activities. When their hobbies are directed and their play manipulated they will get frustrated and learn that their own wants and needs don’t count for anything. Having an ipad in the house and not letting a child use it if they want to just totally sucks.

8- Parenting advice based on nothing
Really, what was that original article article based on? Yeah, nothing. That’s what I thought. It’s just a lament from a dude who is actually really successfully using technology to provide a livelihood for himself and to help people around him. Oh! Technology can be GREAT! There are articles floating around that seem quite research heavy, but on a second glance leave me ABUZZ with questions about who they were studying, and how, and if there is really anything meaningful in there.   Let’s stop the fear mongering research, let’s scope out all the stuff out there –  like this other Psychology Today article by Dr Peter Gray comparing limiting computer time today to hunter gatherers limiting bow & arrow time, or the quiet release of the American Academy of Paeditrician’s new guidleines on screentime for young ‘uns, let’s make decisions that reflect all our family’s needs.

9- People who think “drastic” measures are called for
How about not being drastic? How about simply being mindful and thinking things through and coming up with ideas together that reflect everyone’s desires? How about considering the burgeoning role that technology is playing in our world (genuinely, that is something we can’t change, love or hate it) and considering a family approach to reflect that? How about trying some stuff – moving towards letting go of limits like some families, or having tech-free zones decided as a family, or coming up with guidelines together (this is what we did at a family meeting recently. Family meetings will probably only be a success if your relationship is built on mutual trust and respect.

Drastic is really the opposite of good advice, for parents, in really any situation. For some nuanced, yet traditional, ideas on child hood and screen time see here. 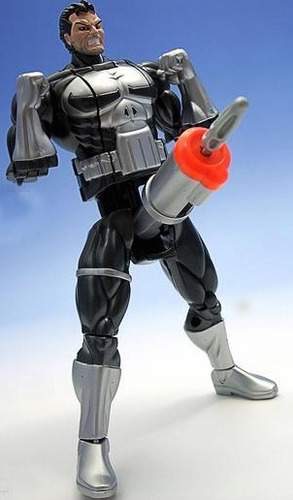 A Shape Shifter Punisher, with a rather rude rocket.

There are worse things to play with than the ipad. That’s all.

Now, I really don’t have the answers for your family. We have tried a lot of things and I have felt torn a lot of the time in the past between my real rational preference for unschooling and letting the girls choose access freely, and then my inner desire for a really “natural” childhood for them. Just now we are in a good space of free reign over technology, but with them choosing OFTEN, far more than the ipad, the options of imaginative play, putting on shows with puppets, river fun and cooking. Which is what I think occurs naturally once we free up all our triggered, negative emotions around screen time. And it has been this partnering thing that has been the piece of the puzzle that now makes it all feel good, for all of us.

It’s close to my heart this technology and children and earth stuff. I love the internet and ipads, and I love trees and oceans, and I don’t believe they should be pitted against each other. I think we are the unfortunate generation of parents who are lumped with having to muddle our way through this technology and social media and internet saturated life whilst trying to hold on to values that are important to us. On the other hand perhaps we are the fortunate ones- we can carve a way for future generations! What a privilege and responsibility – let’s make the journey of childhood in the 21st century one filled with empathy and respect and connection.

As usual, would love to hear from you! Either here in the comments or over on Le Facebook…

Yurt Living: Come and see our yurt, our land, our loo…