The Weaning of a Breastfeeding Devotee

Last night I had a dream that my friend showed me her post breastfeeding boobs. She flipped one out of her bra and began unfolding it and unfolding it, like a magician pulling colourful scarves out of a top hat, until it stretched out as long as her arm. A flat, long, roll of breast. Knowingly, I stuck out my chin and nodded. She began folding it back into her bra, concertina like, matter of fact.

Five long years these boobs of mine have been in feeding action, and just now are they being retired from active, on-demand service. These days they make an appearance for an occasion, three times a day, for my three year old, Juno. And a tokenistic once a month for Ramona who is five. And I guess we will stick to this until Juno is ready for me to hold them a retirement party.

(I say “I guess” because you can only do what you can do, eh? I didn’t think I’d have to lead Juno into a three times a day habit, but it turns out, I just did. My body was beginning to revolt against the constant draw of resources.)

When I first suggested to Juno, about a month ago, that I would like to take breastfeeding down from a million times a day to three times a day she told me to “write it down.” I had to get my book and write it down, and then she made me tear it out and fold it into a tiny square and put it in my wallet. For her own reasons she was wanting this decision minuted and put in an important place.

It has mostly been a fraughtless weaning.  Just a couple of upset moments from Juno. One where she gave me an ultimatum;

“Either you give me booboo or you go to Pak N Save (that’s New Zealand’s budget supermarket) – you choose.”

I don’t know where she picked up the idea of ultimatums, I was definitely cowed. I haaaaaate grocery shopping, and the kid knows it. 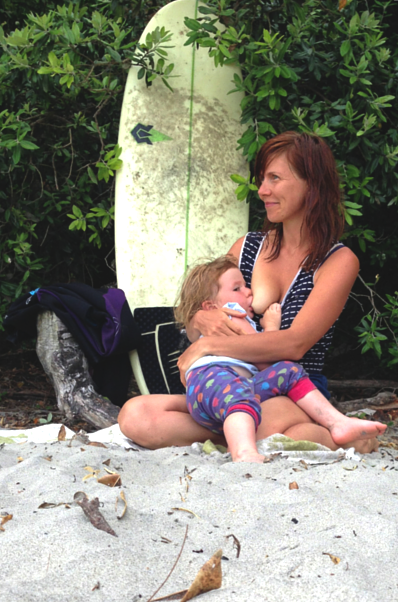 Ah, breastfeeding. What a sweet joy and complex act of motherhood! Source of new mama angst and bloodied nipples, source of immense feelgood body chemicals. Cause of public anger and humiliation, and personal pride and wholeness. Creator of massive, overflowing, up-to-your-chin boisterous breasts and also, eventually, of long, flat, fold-into-your-bra dried up glands.

It’s the start of goodbye, from two breastfeeding devotees.

I’ve written SO MUCH about breastfeeding over the years. For a while there it was all I went on about. Here is some stuff you might like.

Nursing in public and the breastfeeding pyramid scheme

Our experience of tandem breastfeeding

Me! Eat! Your boobies!

Breastfeeding in public as an act of public service

100 Names for Breastfeeding from around the world

Nursing a micromachine: breastfeeding at 16 months

Beyond Bitty – 100 other Names for Breastfeeding

Living in a Yurt – in the winter

Yurt Homes – five reasons to live in one