7 Elimination Communication Tips you need for your nappy free baby!

I have had a couple of interesting emails this week. The first came from a close relative who was just expressing some gratitude for getting her started with Elimination Communication (EC or Nappy Free for something that sounds less Willy Wonkery.) I didn’t mean to get her started, it is just that one time a few months ago I heard her little 4 month old lad do huge trump. Knowing it was approaching the time he normally filled his pants, I whipped of his nappy and he proceeded to do two wees and an implausibly large dump.

Now, I am well aware this makes me seem AWFUL! Imposing my parenting way onto another. I swear, I have only done it a couple of times, once to my nephew and once to my neice, both times when their mothers weren’t around, and I would never do it to YOUR baby.

Anyway, while he was taking his dump, his mama came in. It was, er, a little awkward.

But she emailed this week, saying how since then he has done all of his poos in the potty – THREE A DAY!!- and it has changed their lives. He used to really struggle, poor chap, and turns out  The  Hold helps it all along.

Then on the other hand, the second email. It was a friend also doing EC. Her 13 month old has turned Anti-Potty. It is a common low in this rollercoaster of EC and I really felt some of her disappointment. Those two emails really encapsulate the good and bad of Nappy Free, I reckon.

We began when Ramona was 3 months old, primarily out of curiosity but partly because I felt there must be something in it. Within days we discovered there was and we quickly hit a rhythm, catching 80% of her shizzle.

With every month that passes it is becoming less unusual that Ramona is Nappy Free. Sitting a baby on the potty at three months is ridiculous by almost everyone’s standard, sitting a toddler on the potty is pretty normal. This is a nice feeling – it is hard feeling as if you have to constantly explain yourself, particularly when people can be really quite hostile about it (for example, people “explaining” that it is physiologically impossible for babies to hold their wees in – if this is the case, how comes Ramona has held her wees since she was about 6 months?)

But with her growing up there also comes a sense that perhaps we should be further along the “potty trained” journey by now- since we have been doing it for 15 months!! Of course, it isn’t training. It is communication. And in the communication stakes we are doing superbly- oh yes. She ALWAYS tells us as she is doing a wee, even if it IS on the new carpet.

There is something brilliant about Ramona saying “POO”, walking up to the potty, sitting down and doing her business. She has been doing that since she was about 15 months old, it blew our minds the first time, and even now gives us a huge smile to see the communication effort paying off. Other signs she needs to go include grabbing her bum, patting the potty, looking very serious indeed, and pausing. (Yeah, she really doesn’t pause for any other reason!) In fact, there is a particuarly style of Serious Pause which usually means she already has a turtlehead.

With this big leap in communication comes a tiny bit of disappointment too, when it doesn’t go to plan. Until now it has been quite easy to be breezy about the misses, but now, because we know she can communicate  effectively and even sit her self down on the potty, it is a challenge not to let manipulative language in, or show signs of frustration. The last thing we want is hang ups over taking a dump.

1- The Baby Bjorn Potty Chair – when Ramona was tiny we had a little Baby Bjorn Potty, it was gorgeous but fell out of my bag on to some train tracks when we were going camping last summer. To replace it I got the BB potty chair, for £1 from Ebay. It is MAHUSIVE and I was gutted at first. But, because it is so sturdy, it means she can climb on and off and has been brilliant in fostering some independence about it all

2- Keeping the potty in the same, visible place everyday, so Ramona knows exactly where to find it.

3- The Born Ready website– a totally honest, warm community of people doing Nappy Free with their little ones. It has been such an encouragement. Also the lively Facebook group found by searching EC UK.

4- Keeping on communicating. When she has a miss we routinely say “OH! It’s a wee, wee wee goes in the potty!” and then sitting her on the potty for a little bit. We hold back any negativity. It is lovely when she grabs a rag too, and helps clean up her pee.

5- Putting nappies on. This is controversial as some wonderful ECers suggest not to. But putting nappies on every so often when we REALLY don’t want a puddle has helped us to relax and being relaxed is probably one of the most important attributes in all of this.  Little ones pick up our cues so perfectly.

6- Commitment to noises like PSST. It is remarkable how doing the PSST cue encourages Ramona to take a whizz. If she is a bit distracted doing PSST just seems to help her release her bladder.

7- High entertainment. There are certain times of the day that sitting on the potty is obviously just the perfect activity – namely upon waking. However sometimes she is so into her playing it just seems mean to interrupt. Instead we incorporate potty time- putting the potty in front of the Superhero Base (otherwise known as the Dolls House) or getting out all the best books. (I am editing this a few years later and I am not sure about this tip! I actually think that a child’s autonomy should let them do what they want with their bodies and if they don’t want to sit on the potty we shouldn’t try and manipulate that.) Ramona finding a tree to wee by

I have earlier on this blog suggested that elimination communication isn’t necessarily for everyone. But I think I might backtrack now. Not because I think  parents need anymore pressure put on them – to add cleaning up rogue wees and chasing nakey crawlers around the lounge, or any more burdens of “Eek, I should be doing this” to shoulder.

But because I think a form of elimination communication is accessible to every parent and will often times even EASE the strain of parenting. It is simply a case of adding in a bit more talk when you observe them doing their business – expressing from a tiny age exactly what is going on with their bodily functions, or, if you see your baby pushing out a wee turd, whipping of the nappy, holding them over a loo. A tiny wipe and clean up is done, nappy saved. For some babies, like the little guy mentioned earlier, getting help with the elimination could eliminate a whole lot of angst.

It seems such a shame that Nappy Free is seen as going all out- when it is essentially just about communication, something every parent is already doing.

Are you doing normal potty training, or a form of elimination communication? Have you found anything particularly ace/ hard? 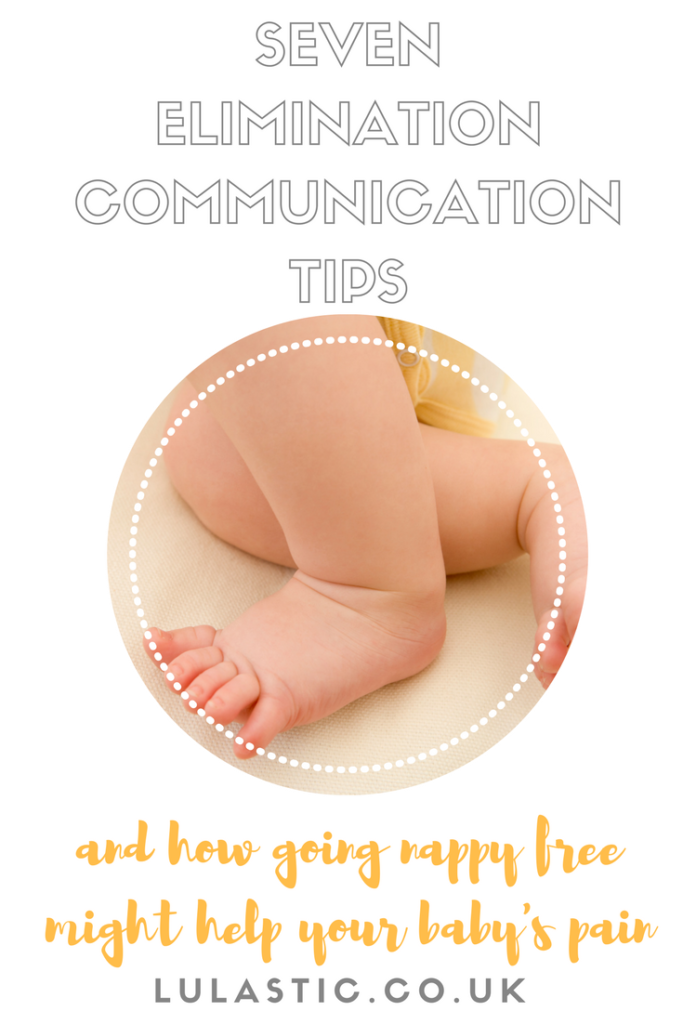 A little bit of sunshine in my kitchen