I don’t think I told you much about the disasterous holiday we had a couple of weeks ago- we went down to the coast for a few days in the campervan. The van broke down (notice how I have moved on from first-name terms here. She normally gets to be Betty) and after spending a day in the derelict car park of Margate’s not-so-dreamy Dreamland had to come home. Oh, also, while Tim had his head in the broken bonnet we had a phone call saying the offer on our house had fallen through. *cries* 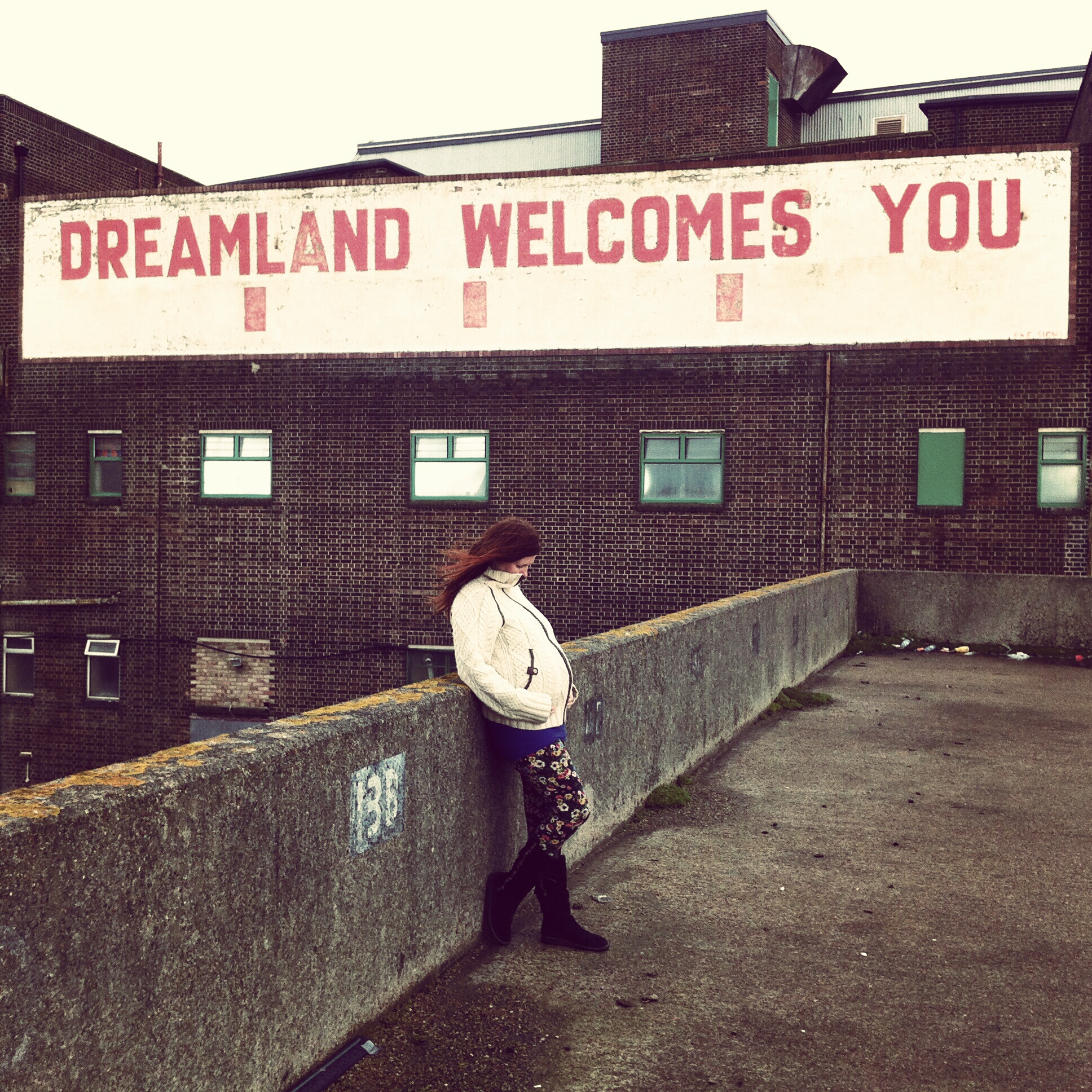 (Hey *trying to be positive* I at least got this cool posey bump shot though. Yeah. Not worth it.)

Before we came home we went out for a Thai meal, we were the only ones in the restaurant and Ramona gobbled up nearly a whole bowl of Pad-thai noodles. As we went to leave, Ramona walked past the solo waitress who had bent down to wave good-bye to her, and stopped. Ramona threw her arms around her neck and gave her the biggest, longest cuddle I have EVER seen. Ramona doesn’t give out cuddles willy nilly. She is quite picky. It got to the point where Tim and I were almost being awkward about it, like “Wow, they are still cuddling…” The waitress was absolutely made up, overjoyed.

Could it be that Ramona was picking up on something throughout our meal, that we were missing? Sometimes, even when I am trying my very best to hide it, Ramona will look at me with her open little face and enquire “Mummy, why are you sad?”

I am convinced Ramona just knew this lady needed a cuddle. That it was more than just a whopping big thank you for her succulent bowl of noodles!

Children are in tune in a way that us adults lost long ago. Their sensitive hearts and inquisitive minds are to be admired and aspired to.

I think we often take it for granted that our children add SO much to society, to life. It seems rare to see them authentically celebrated and treated with awe. 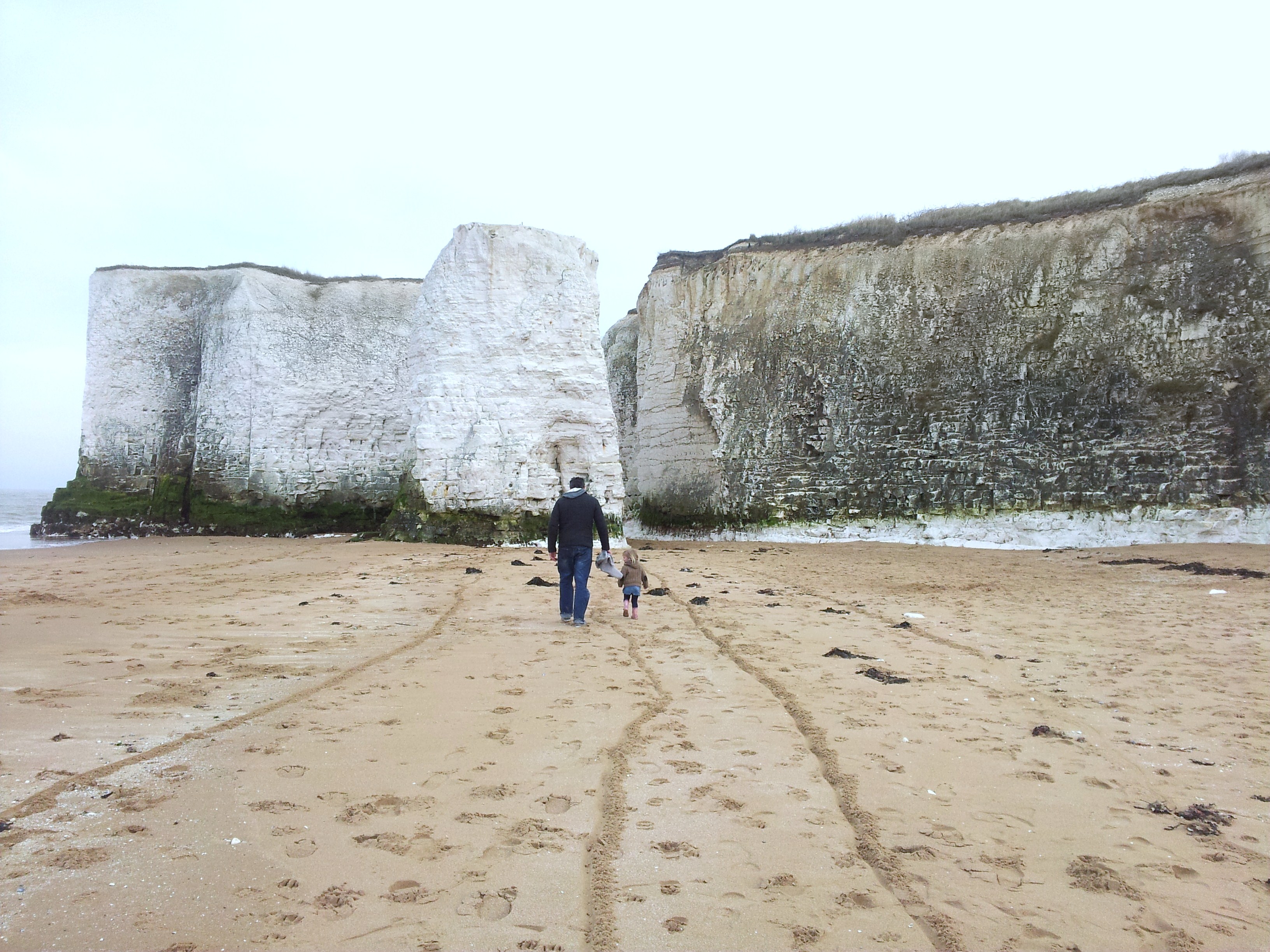 We went to the Dulwich Picture Gallery at the weekend, to see the Murillo exhibition. Such beautiful paintings that are just now being clawed back from vintage confectionary tin world. I was struck by the beauty and sensitivity with which the children were portrayed. The painter’s adoration of children emanated from the canvas- even the filthy, rapscallion orphans were somehow painted with dignity and love.

Others have found this too-

“… you begin to see how compassionate these pictures are, how each youngster, including one black boy who was presumably a slave, is accorded the painter’s absolute respect as a Christian soul, a child of God.”

As we were leaving one room Ramona felt the door needed to be shut (she wasn’t born in a barn, ha!) so she closed it gently. One of the employees of the gallery was clearly alarmed by this action and swiftly tugged it open and abruptly told Ramona, much more crossly then I would tend to ever speak, to leave it alone and stay with Mummy. I was so shocked. After spending an hour in Murillo’s enchanted world it seemed like such a crashingly disrespectful way to treat a tiny tot. 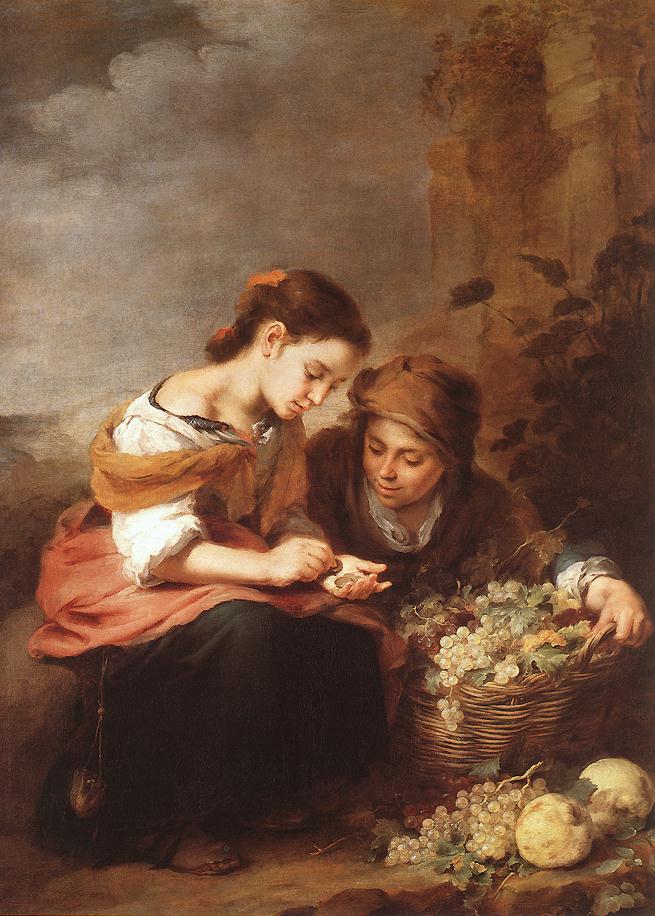 Of course, this is nothing, really. Just last week a mother was in Boots when her toddler knocked some bottles from the shelf and broke a nozzle. A staff member approached, told the child she was naughty and SMACKED HER BOTTOM. (Read the original news article here.) Lots of older people possibly think “Disciplining other people’s kids was all the rage when I was a nipper!” and others maybe think it isn’t that much of a big deal – the comments on the piece mostly suggested readers felt she got what she deserved.

However, once you begin perceiving children as fully human, abundant with gifts and abilities, full of curiosity and sensitivity and traits that are lost to adults, this story becomes outrageous! It becomes a story about ‘well-intended’ physical assault.

When people shout and undermine and mock children we are treating them as less than human, as innately naughty and as deserving of emotional or physical pain. At least once a day I hear something, either in the street, at the park or in a film, which tells me that our views on children are utterly upside down and inside out.

(A little shout out from me to all the parents who, well, shout out sometimes… I’m not saying we don’t all slip up. When we are trying, with every minute of the day, to nurture and love it can be tiring and sometimes we fail to show that respect. But we are trying, right?)

We ARE getting better, I do believe that. Knowledge about child developmental stages is helping us become increasingly understanding of kids and their needs and the ways they express themselves. The idea that kids need aggressive discipline in order to fit to our expectations is becoming less prominent. Hopefully we are on a journey of children being seen less as wandering bottoms wanting a smack and more tiny teachers who could enlighten us a whole lot.

Bring on the day when admonishing and shaming children in public a thing of the past. When we champion children as our teachers in love and curiosity. When we strive to be as sensitive and intuitive as they are. When we admire their abandon rather than quash it.