Oh yeah, I know. I do love to use the word “tyranny”. It’s so dramatic. *flounces about* Tyranny this, tyranny that.

Ramona was introduced to her first whizz bang, vibrating, flashing toy when she was seven months old. It had rolled towards her from another seven month old and it frightened the living day lights out of her! The way she responded to it, revealing the whites of her eyes, her whole body tensing, a whimper escaping her lips made me think I should have introduced toys earlier. (In hindsight manufacturing a baby toy based on Freddy Krugar, wielding knives and screeching is probably a bit cruel.) (Jokes, it was just your average modern baby toy.)

Over the following months all the nooks and crannies of our home became filled with children’s bits and bobs. We tried to keep them simple, wooden or vintage (we had ugly plastic ones, mostly keep stuffed behind the sofa) but nonetheless we had many, many toys.

Selling our house and moving into a Campervan gave us a bit of an escape from STUFF and for the last four months Ramona and Juno have had a toy box consisting of 7 small dinosaurs, a doll, a cuddly lamb and a pull along dog, supplemented by rocks, twigs, trees to climb, shells, leaves, and beaches to dig. In fact they have been occupied most of all with these playthings from nature.

Which is kind of funny, considering what the production of toys is doing to nature. I read this article, The Gift of Death by Monbiot earlier and was gobsmacked. He mentions that NINETY NINE PER CENT of stuff produced ends up in the bin after 6 months, and he shows several times that the links between our mindless consumption of All The Things and damage to the earth and poorer people in developing countries are strong, direct and undeniable. 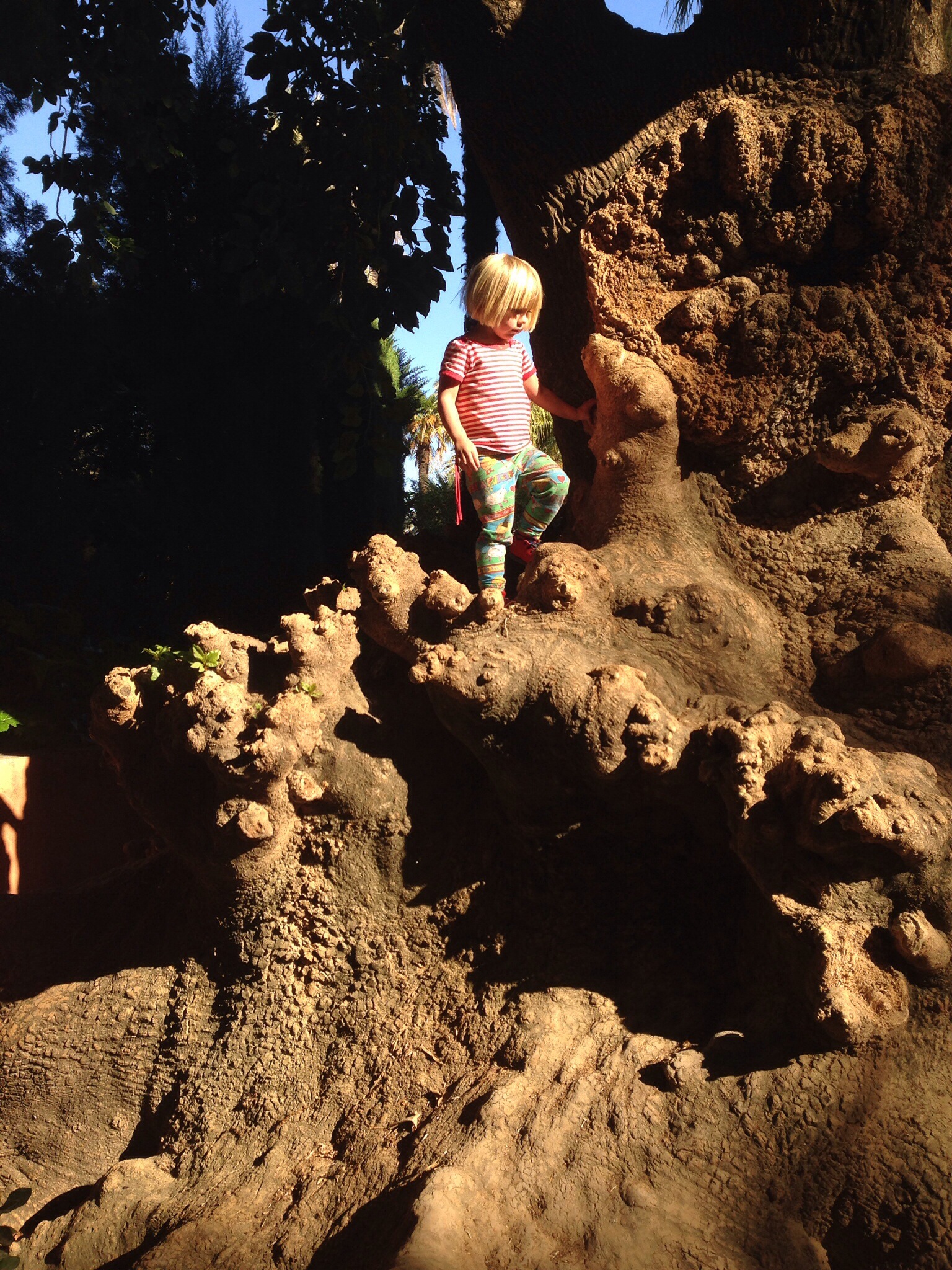 It seems mad that we are causing so much havoc to create things for our children that research shows are unnecessary, and often even bad for them. Toys can be so very prescriptive – they basically tell a child how to play. They are also very often gendered- they show boys and girls through their colours and accompanying imagery, who should be playing with it, boy or girl. They can also be over stimulating for very young children and conversely they can limit an older child’s ability- six and seven year olds could be spending their time creating genuinely amazing stuff, carving boats and cooking cakes.

As we approach Christmas I think of the millions of parents who are putting themselves into debt just to buy things for their children that not only do the kids not need, but that are probably having a negative impact on the kid’s creativity and imagination. And, AND, will probably end up in the landfill eventually anyway.

It’s just a farce. And a tyranny. *flounces*

The wily world of advertising has somehow convinced parents that a child’s toy stash is directly related to how much we love them. A child’s room is only really a child’s room if the walls are lined with toys- it’s especially bizarre considering the whole concept of toys was only invented in the 1600’s.

Birthdays and Christmases are hung on the act of giving presents. It is hard to imagine a celebration without a small mountain of gifts. 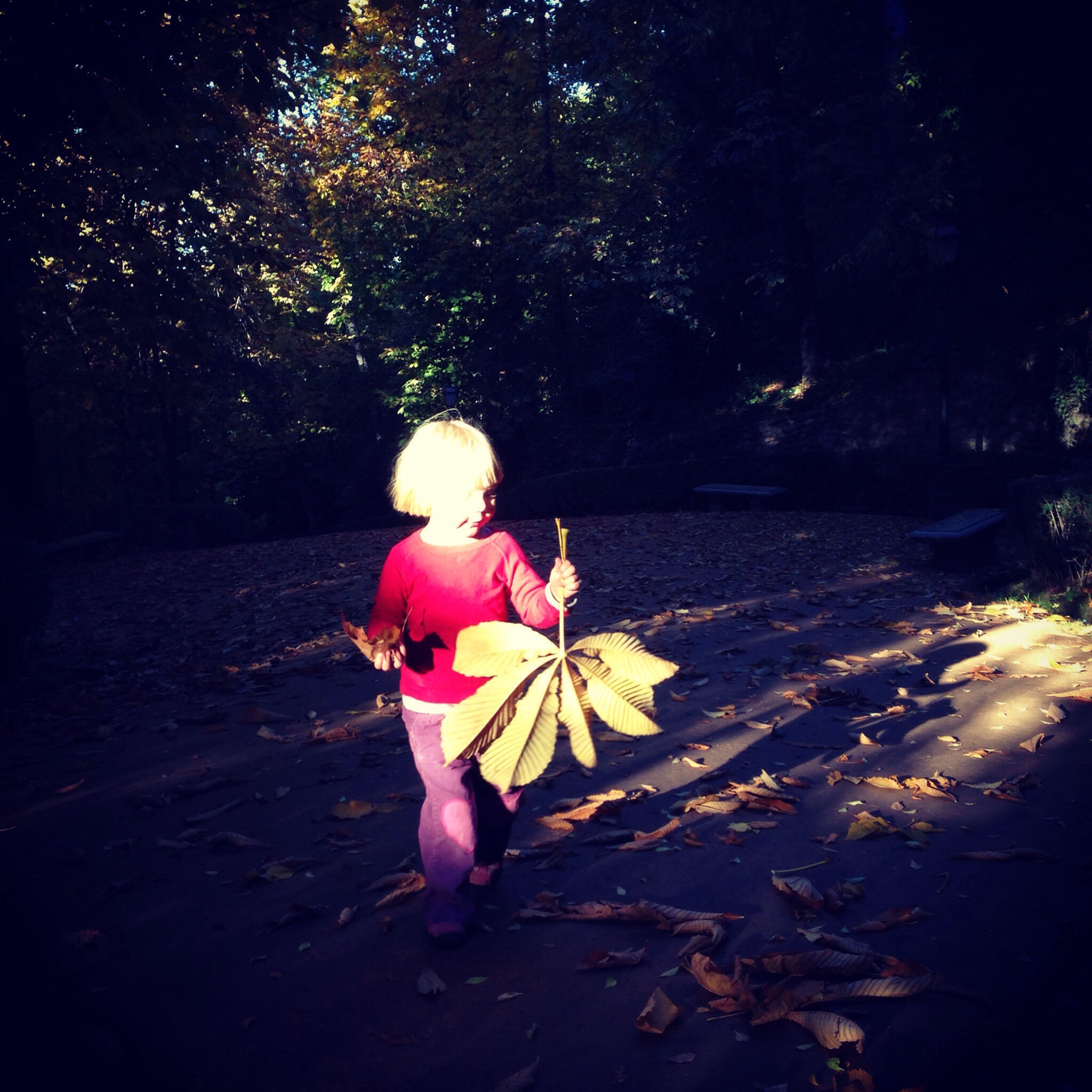 It’s a bit high, on my horse up here, so let me confess a little something….

Ramona had her birthday a few weeks ago, while we were away. The night before, as she slept, I put together a little pile for her- a lush lion hat knitted by her Aunty and Uncle, a beautiful set of paper lanterns from Nana and Grandad and from us, a jumper from a flea market, 7 plastic dinosaurs from a charity shop and a vintage card game of Misfits (remember Misfits? This pristine set was beyooootiful- Ramona didn’t really appreciate it’s vintageness hehe) three things that cost £7.

I cried. And flung the dinosaurs across the camper. £7?! Why was I such a mean mum?

Tim had to remind me that we had very specifically chosen to do this.

But if I, even I, so ambivalent about the general approval of society that I didn’t even shave my legs and armpits for my WEDDING, can’t handle it, who can?!?! The world is dooooooomed.

I pulled myself together and we have steeled ourselves once again for a present- moderate Christmas. Last year we gave Ramona a fair trade bus which is gorgeous, and we will find one thing just as ethical for her this year. And eight month old Juno can chew the wrapping paper.

Because we need a new model, for children’s rooms, for Christmases, for Birthdays. For childhood.

Imagine it- children whose imaginations are not limited by the innate rules of the plastic thing in their hand, who run about unbound because the stick they are waving is a Hoover, a sword, a dog. That’s not tragic, it’s creative.

Parents able to say no to overtime at work so they can get home to the kids and play Hide and Seek rather than earning more dosh to buy them more presents.

Families sitting around a Christmas Tree reading stories and poetry, looking at pictures and loo-roll nativity sets they’ve created for each other, spending the day having fun in a wintery forest and baking gingerbread INSTEAD of wildly flying from gift to gift. I know; “write a poem for each other” it’s laughable eh? I wish it wasn’t.

How do we get there? Especially when we are often surrounded by generous, well meaning friends and family?

~We can ask family members to do something other than give a present- such as a day trip to a cool place.

~We can chose one epic toy – or something more expensive from the list below- and ask family members to pitch in.

~We can put the current stash of toys on rotation, so that rooms aren’t filled with toys and so children can go deep with each item, plundering it’s imaginative depths.

~We can make celebrations more about other stuff- games, singing, candles, rituals.

~We can specific on Party Invitations that we don’t want presents.

~We can speak with other parents about this and see if they want to join in with the philosophy.

~We can choose to give things other than toys to our children, and the children in our lives. For example:

A mixtape (Ramona has been given two of these and they surpass all things she has ever been given, ever! It’s just a homemade CD with cool songs on)
Craft materials
Tools
A few classes of something (dance/ pottery etc)
An experience (Ramona rode a horse for her birthday this year)
A micro love bomb (3 hours totally devoted to doing anything they possibly want in the world -based on Oliver James’ concept for troubled kids)
A micro adventure (grab a tent and sleep in the local woods for the night, there are several within half an hour on public transport in London)

Toys aren’t inherently bad, but being trapped under a need to buy, and children knowing little other way to play IS bad. Children need fewer toys and more tools.

We need a new model, and we are the ones to make it happen.

As soon as Ramona and I enter a charity shop or a jumble sale I zoom straight to the kids section and pick out the nicest (by nicest I mean oldest/ most wooden/ cheapest) toy or coolest kids book and place it into her hands with an excited exclamation of “LOOK- this is just the ticket!!”  I then move straight away from the kids section, out of danger territory. It may seem a bit mean, or a bit against my “child-as-unique-independant-person” philosophy but I simply CAN’T take home another giant, ugly, fluffy toy circa 1998- and this IS the thing she will choose if left to her own devices.

It is something we have to face, as parents. Kids toys ain’t often pretty – or perhaps often too pretty; pink, beribboned, cuddly. They can take up a lot of space and ruin the aesthetics of a room. I’m sure many of you don’t care, and I wish I didn’t.

But I do. I just dooooo.

Fortunately, the world of second hand provides a mountain of eyeball pleasing kids options. I am always on the look out for retro looking, vintage play things and have found some gorgeous numbers that Ramona loves too.

We have one area where the ugly (by ugly, I really only mean new. Why are new things so damn ugly?) things live, in an ancient deep drawer hidden to the side of the sofa.  And I have just recently launched an Exhibition of Old Children’s Things, on quite a prominent shelf, that all three of us enjoy looking at.

Apart from the Ukeleles, which were gifts,  all of these are second hand. I picked the abacus and clock up from a charity shop in Blackheath a couple of weeks ago for One Squid and found these little playmobil bike riders on that Legendary Farham visit. Eeek, I just love ’em.

I always keep my eyes peeled for little music instruments so that when Ramona’s chums come over we can all have a bash and a sing. We have an immense Salvation Army heritage- all my 3 generations on both sides, my parents, Aunties and Uncles are all ministers in the Barmy Army and Ramona does them proud as she tinkers with this “timbrel” (tambourine) I got for 50p last week at a Bootie.

She is singing “Wind the bobbin up” -which mostly just involves her saying “Pull, Pull” over and over and over. It is her favourite song, she bursts out in it approximately six times an hour but it also sounds a lot like her sound for “Poo” which results is us spending lots of time each day on unnecessary but tuneful potty visits.

And finally, just a couple of weeks ago at my local car boot in East Dulwich I found this pretty ancient skipping rope with a couple of scary mushroom guys for handles.

PS little while ago I posted about some other vintage toys and included some secondhand toy pillaging tips – have a broose. (That’s Scottish for browse.)

PPS Have you found any thing retro for your kids recently?

PPPS I am linking up with the magical Magpie Monday over on Liz’s blog – if you get a chance do go and have a squizz at all their wonderous second hand goodies.

PPPPS Have you noticed my new header? Can you tell me why it is blurry, the blithering, bladdy, blurry &a*t%r&!

PPPPPS If you enjoy reading this old blogaglog of mine, have you had a moment to put me up for a MAD blog award? There are loads of catergories but you could especially vote for me in the “Most Over-Vintaged Up Photo Editing ever” or “Most amount of Made Up Words In a Post In The World”.  No, seriously, I reckon Home/ Thrift/ Craft catergories are possible themes of mine? Muchos Gracias.