Beginning to Unschool (Why We Chose Unschooling)

We are spending almost everyday just hanging around the farm we live on at the moment. We slog up the paddock to feed the chickens and Ramona climbs into their coop to collect the eggs. We pick up the other kids and take a for walk to visit the cows. We forage for chestnuts and roast them. Ramona swings, bounces, negotiates games with the kids. She bakes biscuits, she plants flowers and we read. She paints her whole arm blue, they all watch a movie then they set a rat trap.

It is life and it is learning and it is Ramona’s school.

State school is the only right education for a left wing family, right?
I have always known that my children would go to school. My socialist lean towards good state schools for the masses grew alongside my awareness that I would one day have children that would attend them.

I just knew that the only way schools could meet the needs of a whole community was if all members of that community, rather than the poorest who couldn’t do better, supported them. Even as a teenager I scoffed at Labour politicians who educated their kids privately.

This was despite ALWAYS hating school myself. I was bullied for most of my primary school years and spent ALOT of my secondary school years absent- lazing about the beach getting a well good suntan (I’d come home and shake the sand out of my bag and mum would sigh and ask “Good day at school, Lu?!”) or playing Snake on my Nokia on the back row of desks. (I was a champion at Snake.)

Since actually having children, like so many of my opinions, I have changed my mind. 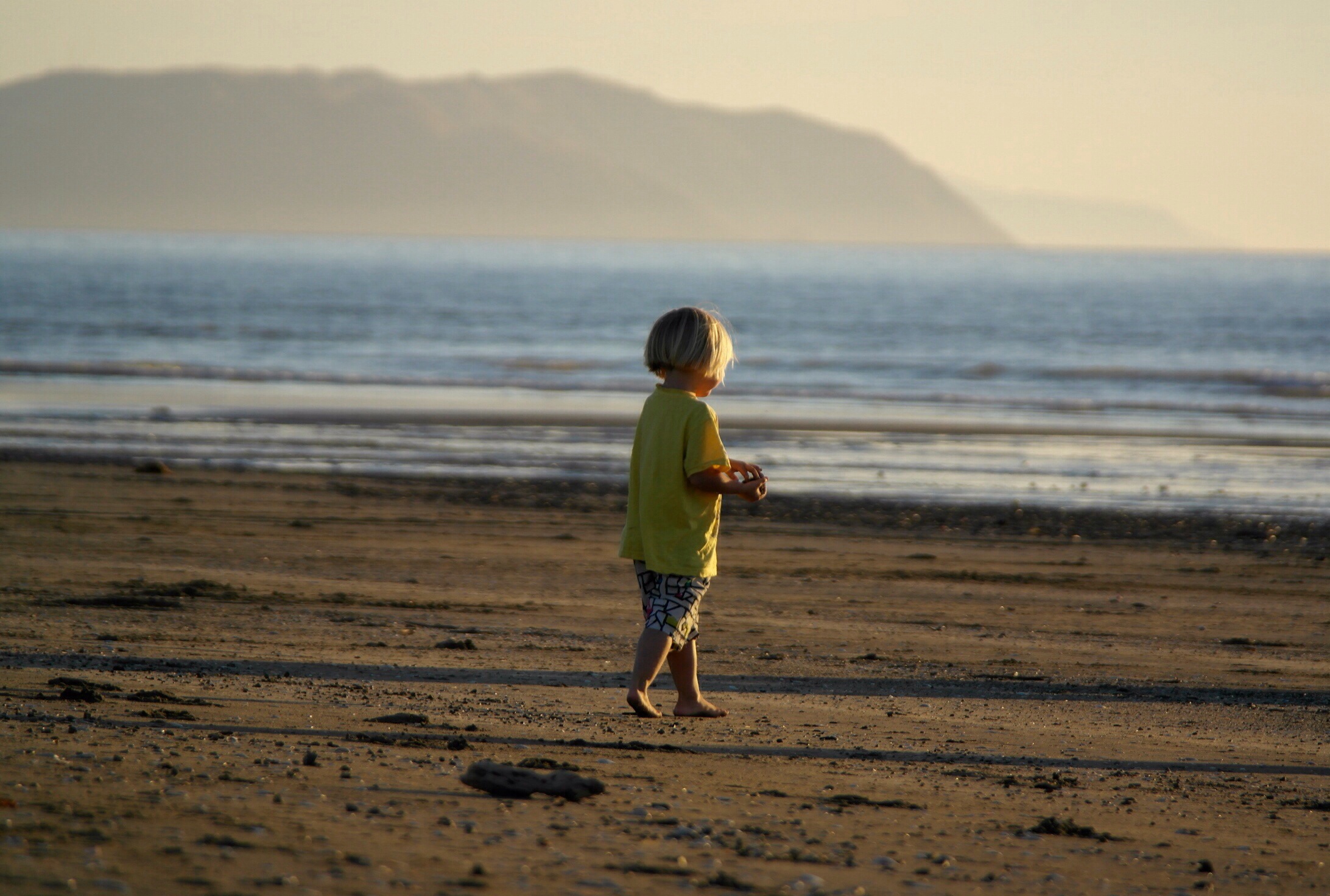 Beginning to Unschool (Why we chose autonomous learning)

A child has a natural instinct and ability to learn
I first questioned our faith in our education system when I read about one of my favourite authors lack of ability/desire to read until she was eleven, at which stage she taught herself and began reading and writing novels ferociously. She didn’t go to school, she simply hung about with other kids at their commune. WHAAAT? People can become successful novelists without school?

I began reading up on children’s development and learning and I began to trust that intuition I had about my child’s natural ability to learn.

It was through reading John Holt’s “How Children Learn” that I found my instincts shored up. Through spending time with Ramona I had become fairly convinced that her curiosity and sponge – like mind was enough of a combination to give her all the learning she would ever need in life. Just like I *never* taught her how to speak (really; we never once corrected her talking or pronounced items to her, we simply spoke to her a lot) I became sure that she wouldn’t have to be taught anything.

The times that I tried to teach her stuff fell flat on their face- for example, when we found her a secondhand scooter and I tried to show her how to turn it and use the brake. She completely ignored me and continued to use it all wrong but then one day, about a year later, she was just ready and she got it out and in the space of half an hour could turn and brake, and charge WAY TOO FAST down massive hills, just like a pro. All without a peep of advice.

Through John Holt I discovered hundreds of examples from home life and the classroom (he was a teacher for many years) of children taking their own learning into their own hands and discovering SO MUCH. And most of all, delighting in it. 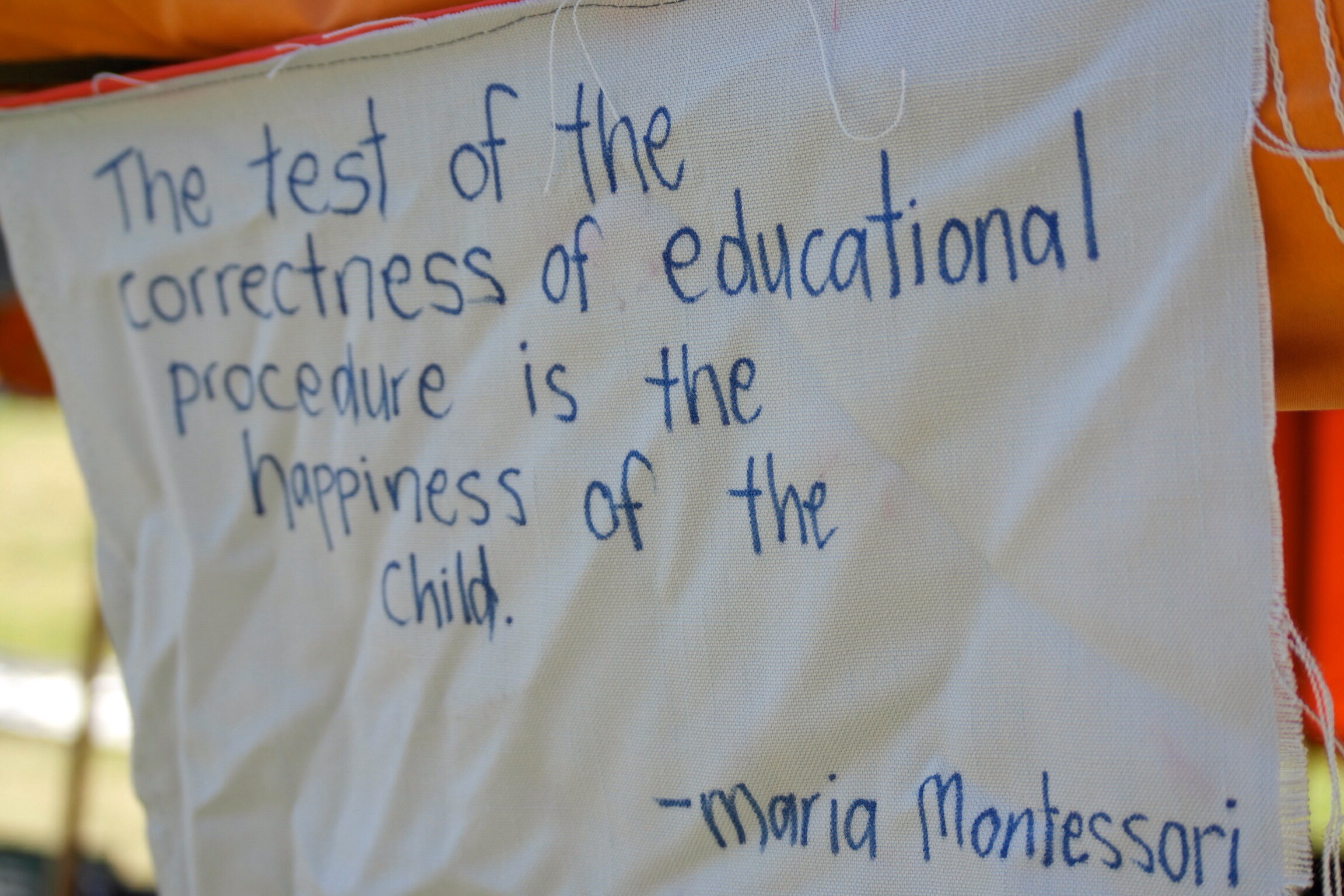 I actually feel sad that for most of my life learning for me has been completely devoid of joy. It was only when I was 17 and went to college, where I was given a choice of subjects, and crucially, an enormous amount of autonomy, that I discovered how much I loved to learn. And then, despite not knowing any algebra, or even knowing what different clouds are, or who was the reigning king in 1703, because I was far too busy mastering Snake, I went on to become a fully functioning adult! And I got A-levels, and then a diploma, then a Bachelor of Arts and then a Master of Science!

As soon as adult-led, compulsory education got out of my life I fell in love with learning.

I feel that for far too much of the time an adult’s interruption in a child’s learning process actually hinders that learning. That we try to teach something in a little box , the boxes that all our schooled, adult minds work within, and the child then learns to put that discovery in to a box, rather than what they were originally going to do with it which was probably explosively creative and intelligent and linked up to all other bits of knowledge they have in their amazing brains.

With a nurturing, supportive environment children are fully able to complete their own learning journey.

The term for all of this? Unschooling. 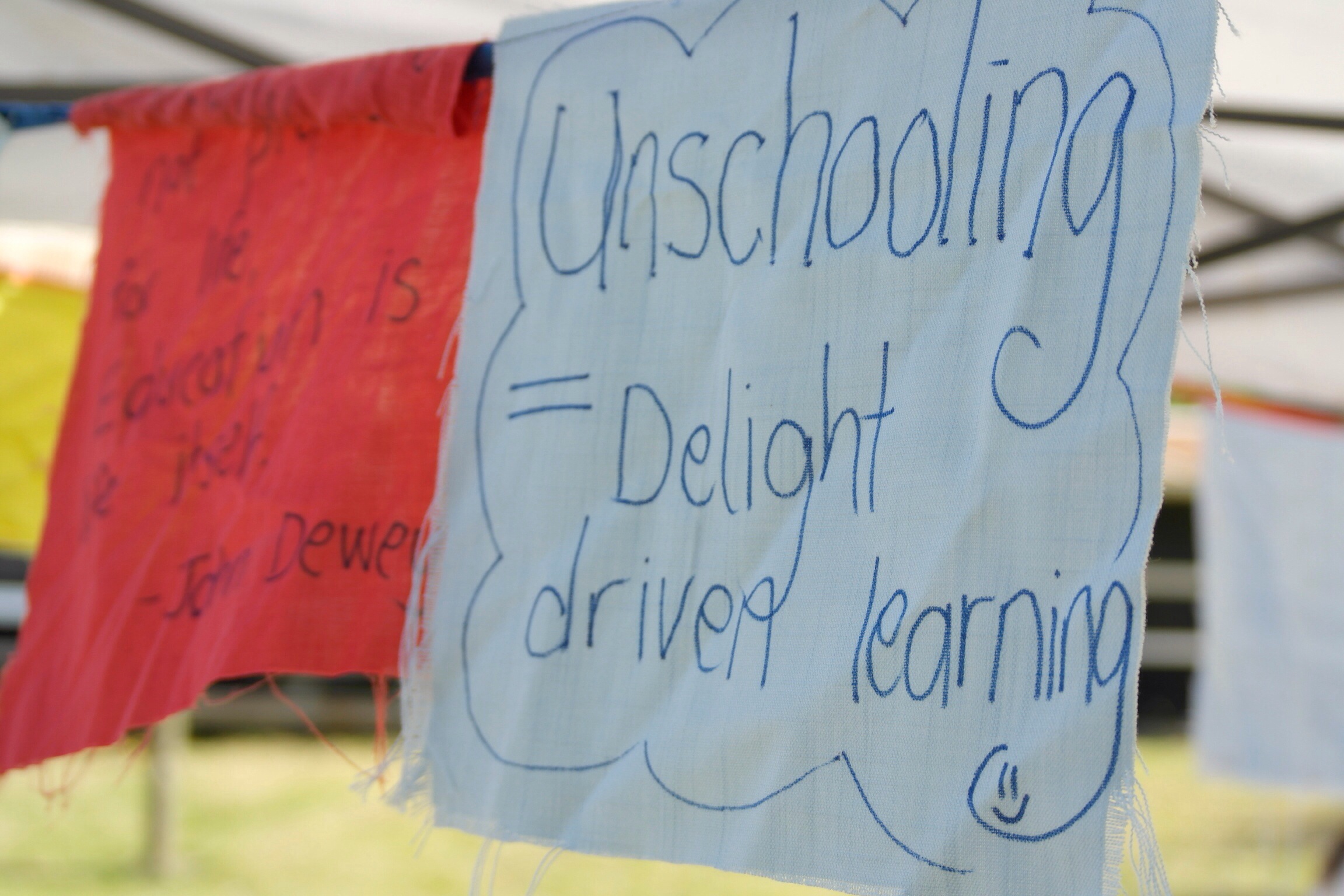 Unschool in every part of life
I recently realised that we have always been unschooling. For unschooling isn’t just “Not sending children to school” – it is really a whole life philosophy of trusting children. Trusting their own natural learning process but also trusting things like their eating (Baby Led Weaning is a great example of unschooling with a baby!) and their sleeping and their playing.

A few weeks ago we trundled along in big old Bert (our bus) to the New Zealand Unschooling Retreat. We bowled in through the gates and found a whole field full of tents, the whole place strung up with flags and a big craft marquee in the middle. (It is what heaven is like.) There were way more people then I thought would be there and we met so many people on this journey. Most unschoolers I knew by then were through online forums like Facebook groups- and the internet can be quite a polarising, angsty place, eh? To meet unschoolers in real life and to see how gracious and understanding and embracing they were was awesome.

And to spend time with so many families who work outside of the common control based relationship that can define quite a lot of other families made us feel normal!

It really did feel different to another gathering of families. There were no threats called across the fields, no bribery at the shared dinner, some kids up as late as the adults, all kids treated with as much respect as the parents.

It was a sort of mini utopia of peaceful adult- children interaction, a place where the children were autonomous and the adults supportive.

Here is a video from the latest unschooling retreat from a whole bunch of people who unschool:

School’s out for… Ever?
And I guess that’s the funny thing… It is fully possible to be an unschooling family whilst having children at school. Some parents will do all this stuff- this trusting their child, communicating respectfully, allowing full autonomy- but not feel able to have their children at home full time, or their children will even choose to go to school.

If you encourage the sparks you see in your child’s eyes, give opportunities for them to dig deep into the things they love, and give them space from pressures to read and add and write then you are unschooling, even if the go to school.

We have heard of a local preschool that is completely child-led and even have one full day in the local woods and we have begun thinking about Ramona going there for a day or two. She LOVES hanging out with other kids without us and I think she would thrive.

And if we manage to set up a Forest School ever, then we would happily send the girls there – that is basically unschooling under trees!

But I do feel that at this stage, a classroom led by adults where tests and homework and a disjointed curriculum are not for us. 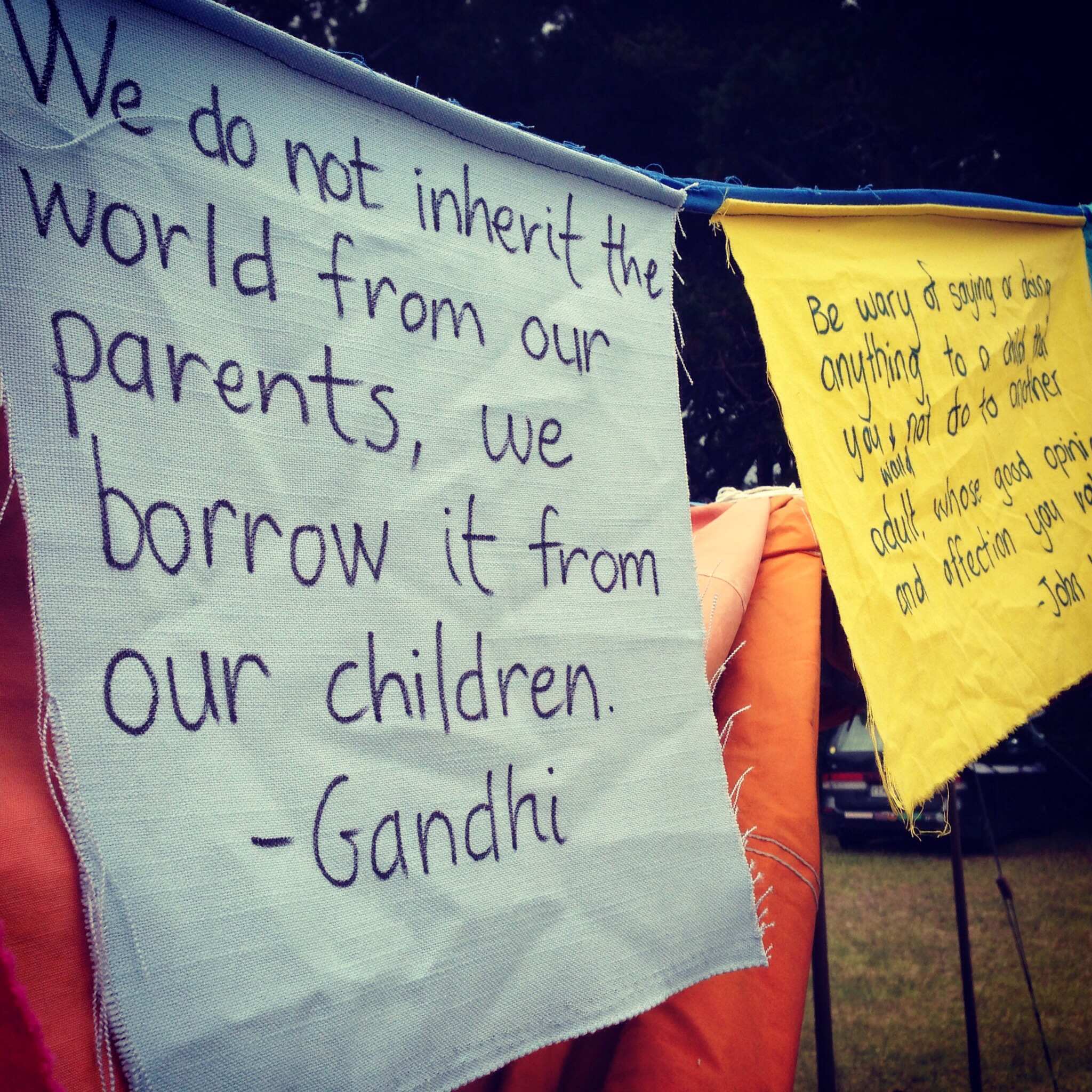 If you unschool you are laying the groundwork for utopia
And I guess I am left with the same question I began with. Can you really be a lefty and unschool? Are we not ditching the rest of society? Being uncaring about the state of state schools?

The way I see it is that ultimately schools *will* get there. They *will* eventually understand and put into practice the fact that a child’s learning journey is best undertaken free from pressure and that a child has the right to be treated respectfully and given autonomy. It might take a while but eventually schools will be up to it. (There are already some amazing schools in Germany; Democratic Schools and Forest Schools that look this way and preschools sometimes practice this stuff.)

We are on the cusp of a movement that will allow children freedom and rights and responsibility. But to get there we need families already acting in this way.

The Unschool Life is part of the movement – by supporting natural learning and respecting the full rights of children we are revealing it! We are saying “this can be done!” And we are building a world where schools can too.

So long term I am becoming convinced that choosing to unschool is one path to a socially just society. (Which is what all us raving commies want, eh?)

Have you heard of this unschool malarkey? Do you do it in parts or fully? Would love to hear from you. (I don’t have much internet in my life so can’t reply to each comment but I do want you to know I read and value each one.)

Further Reading:
Our Muddy Boots– I love this radical, free family life blog.
Sandra Dodd– one of the very first people who ever put into words my instinct for unschooling
Joyfully rejoicing– be challenged and get excited about all the potential!
Unschoolery.com – short snippets of inspo

So for others thinking about whether to unschool or not – take it slow, find a tribe, and consider the holistic, life approach to learning.

Further unschool reading on this blog: What is unschooling?